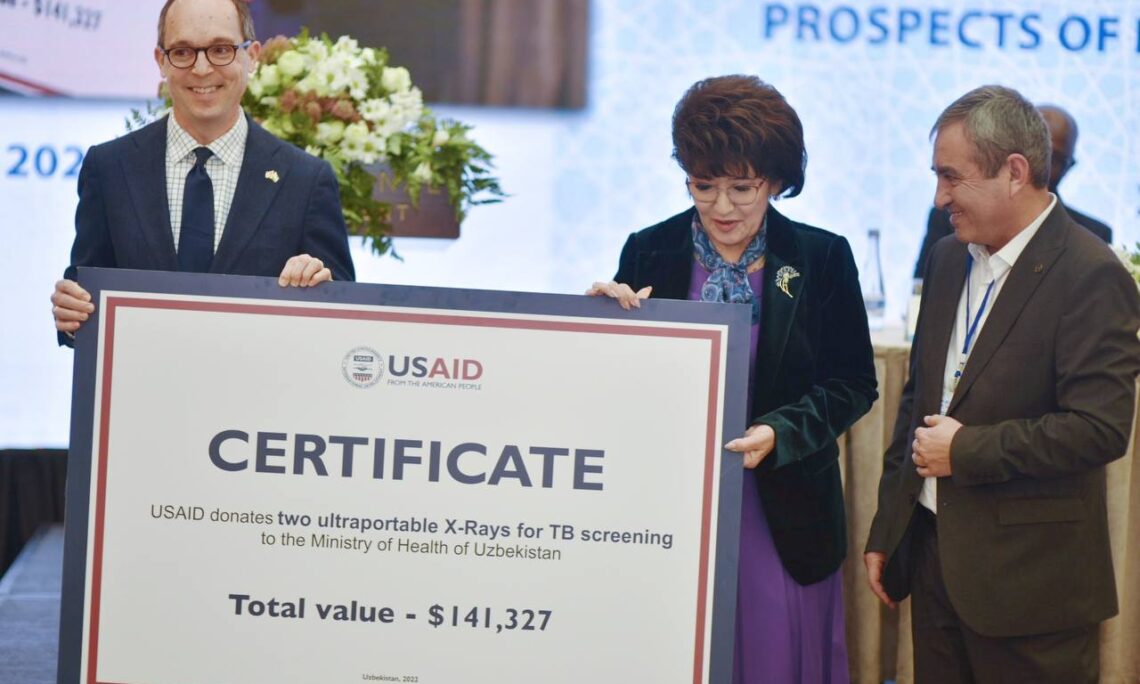 Tashkent, October 20, 2022 – The U.S. Agency for International Development (USAID) donated two state-of-the-art, ultra-portable Delft Light X-ray machines to the Ministry of Health for the Tashkent Region Health Department in a ceremony held during the International Tuberculosis Conference in Tashkent today. The X-ray machines will enable TB screening services to reach communities living in remote areas and will improve health for the most vulnerable citizens in Uzbekistan.

“Controlling tuberculosis is a global priority and the United States is proud to support the Ministry of Health’s commitment to end TB in Uzbekistan by 2030,” said the U.S. Embassy’s Chargé d’Affaires Paul Poletes. “USAID leads the U.S. Government’s TB efforts around the world and is a long-time partner of Uzbekistan’s National TB Program.”

Uzbekistan’s National TB Strategy for 2021-2026 aims to reduce the TB incidence rate by 50 percent and the number of deaths by 75 percent by 2025. The portable X-ray systems will screen and diagnose people for TB and can also detect other diseases, including certain cancers. The machines can run on either batteries or solar power and are capable of diagnosing TB in minutes. Each machine can fit into a backpack, is equipped with artificial intelligence software, and is capable of taking 200 images per day.

The X-ray machines will be piloted in the Tashkent region. In addition to the donations, USAID facilitates training for radiologists to ensure optimal implementation. Additional devices will be procured by the Global Fund for roll out to equip all regions in Uzbekistan with this innovative solution to screening individuals in hard-to-reach areas.

The International TB Conference, which was supported by USAID, was dedicated to the 100th anniversary of TB services in Uzbekistan and the 90th anniversary of the Scientific Center of Phthisiology and Pulmonology. The conference objective is to highlight the milestones of the National TB Program in Uzbekistan, including its history and achievements.