For over six years, the Reintegration for Trafficking Survivors Project provided long-term reintegration services for female trafficking survivors and worked to prevent human trafficking of socially vulnerable women. Istiqbolli Avlod staff provided services, including psychological assistance, medical support, legal aid, and vocational training to close to 400 survivors of and women-at-risk for trafficking. In 2015, Istiqbolli Avlod opened a Training Center for socially vulnerable women, which provides courses on cooking, computer literacy, sewing, and cosmetology to help reduce the risk of women’s exposure to trafficking.

In her opening remarks Ambassador Spratlen emphasized that: “Women are particularly vulnerable to sex trafficking.  The physical and psychological trauma they suffer requires extensive early and on-going care to help them recover. Without such care, the risk is high of falling victim to trafficking again.”

Conference participants exchanged best practices in reintegration of human trafficking survivors, discussed the results of the project, and developed next steps and recommendations to strengthen national cooperation of government and non-government actors in combating human trafficking.

Ambassador Spratlen praised the Reintegration for Trafficking Survivors Project and the Istiqbolli Avlod staff and assured the audience that the United States will continue to work with the NGO through another existing project focused on prevention and criminalization of human trafficking. This project includes an active hotline for people who need help and provides training to law enforcement on how to identify victims of trafficking and conduct victim-centered investigations. 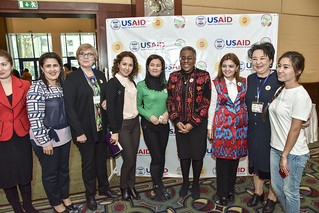