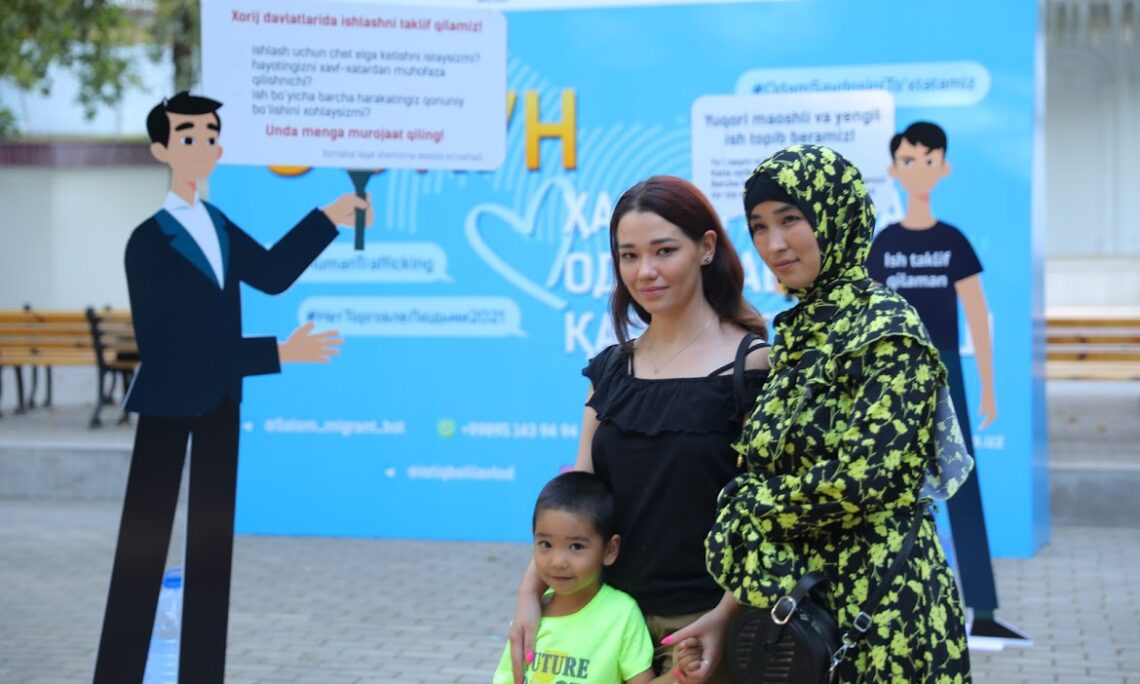 Annually, World Day against Trafficking in Persons is observed on July 30 around the globe. This year, USAID’s Safe Migration in Central Asia activity, implemented by Winrock International, in cooperation with the Government of Uzbekistan, civil society, and private organizations marked the occasion with activities across Uzbekistan to raise awareness about human trafficking and ways to prevent it.

Every year, hundreds of thousands of Uzbekstanis migrate to Russia, Kazakhstan, Turkey, and other destinations to earn a living. According to the Uzbekistan Agency of External Labor Migration of the Ministry of Employment and Labor Relations, nearly 1.7 million Uzbekistani citizens are currently working abroad. Many of these migrants lack information about the risks they may face or how to avoid falling prey to human trafficking.

According to the U.S. State Department’s Trafficking in Persons (TIP) Report 2021, Uzbek authorities identified 150 victims of trafficking in 2020, whereas non-governmental organizations (NGOs) identified 239 victims during the same period.

The State Department’s TIP Report monitors challenges and progress of countries on their efforts to address human trafficking issues and provides recommendations on improvement. Uzbekistan advanced from the “Tier 2 Watch List” to “Tier 2,” in 2021, indicating that the country “does not fully meet the minimum standards for the elimination of trafficking but is making significant efforts to do so.”

Among the TIP Report recommendations for Uzbekistan is a call for increased awareness among labor migrants on their rights and obligations. It is therefore significant that on July 1, the very day the TIP Report was released, the Government of Uzbekistan launched a 30-day campaign in partnership with the USAID-funded Safe Migration in Central Asia activity and its NGO partners together with UNODC, ILO, and other local and international organizations to share information on safe migration, resources available, and where people can find help and solutions.

Through NGO partners, Safe Migration disseminated printed information about human trafficking and hotline numbers for victims of human trafficking across the country. “Most reactions from locals were positive. People wanted to know more. They kindly asked us to do more public awareness activities,” said an NGO volunteer distributing pamphlets in buses and answering passengers’ questions.

The Safe Migration in Central Asia activity launched, “Transportation against Trafficking” as part of the campaign focused on intercity buses and trains. Private transport firms agreed to place stickers with instructions on how to avoid human trafficking in their vehicles. Uzbekistan Railways also agreed to play a Safe Migration-produced video informing travelers about the signs of human trafficking.

In partnership with the Government of Uzbekistan and the NGO Istiqbolli Avlod, Safe Migration produced and distributed 10,000 informational brochures across Uzbekistan including with assistance from the private sector. For example, in Namangan, Istiqbolli Avlod’s branch partnered with a local sewing enterprise and conducted an event raising awareness about forced labor for its employees. The campaign had nearly immediate results. The hotline received a call about 12 migrants whose passports had been confiscated in Kazakhstan. Additionally, several women called the helpline to get psychological and legal help and for consultations on safe migration.

To reach the youth and active social media users, Safe Migration engaged popular Uzbek bloggers to explain in a video on what is human trafficking and how to avoid the risks of being trafficked. Bloggers posted the video on their social media channels reaching 44,000 of their viewers, and through posts on various social media channels, their video message reached more than 230,000 viewers in three days.

In a photo zone at a central park in Tashkent, Safe Migration and its partners placed cutouts of animated heroes informing passersby about human trafficking. Organizers engaged park visitors in a quiz as a way of explaining human trafficking issues.

In cooperation with the Sub-Commission on Countering Trafficking in Persons, Safe Migration also developed and launched a Telegram bot called @salom_migrant_bot, a virtual online consultant on migration and human trafficking, and has already reached more than 300,000 views. Through the chatbot, labor migrants can learn about the rules of work and residence abroad, the rights and obligations of labor migrants, as well as about the types of support available for migrants. The bot also has many useful tips related to COVID-19.

The campaign culminated on July 30 with a roundtable including participation from international organizations, NGOs, and state organizations discussing the issue of trafficking in Uzbekistan at the regional and international level. Participants shared some global best practices and the Uzbek government reported on the measures being taken by the country to improve the situation.

Having reached over a million people for two consecutive years, through a month-long campaign, USAID and Safe Migration in Central Asia will build on this momentum and continue to inform migrants about their rights and resources available to them.

The USAID-funded Safe Migration in Central Asia activity is being implemented by Winrock International in Kazakhstan, the Kyrgyz Republic, Turkmenistan, Uzbekistan. It is a five-year activity that uses evidence-based practices and cross-border connections to strengthen the mutual accountability and effectiveness of governments, NGOs, and the private sector to prevent trafficking-in-persons, protect survivors, and promote safe migration. The activity works in close cooperation with local governments, civil society, and the private sector to improve migration practices and prevent exploitation. For more information on USAID’S work in Central Asia visit: https://www.usaid.gov/central-asia-regional/fact-sheets/safe-migration-central-asia.