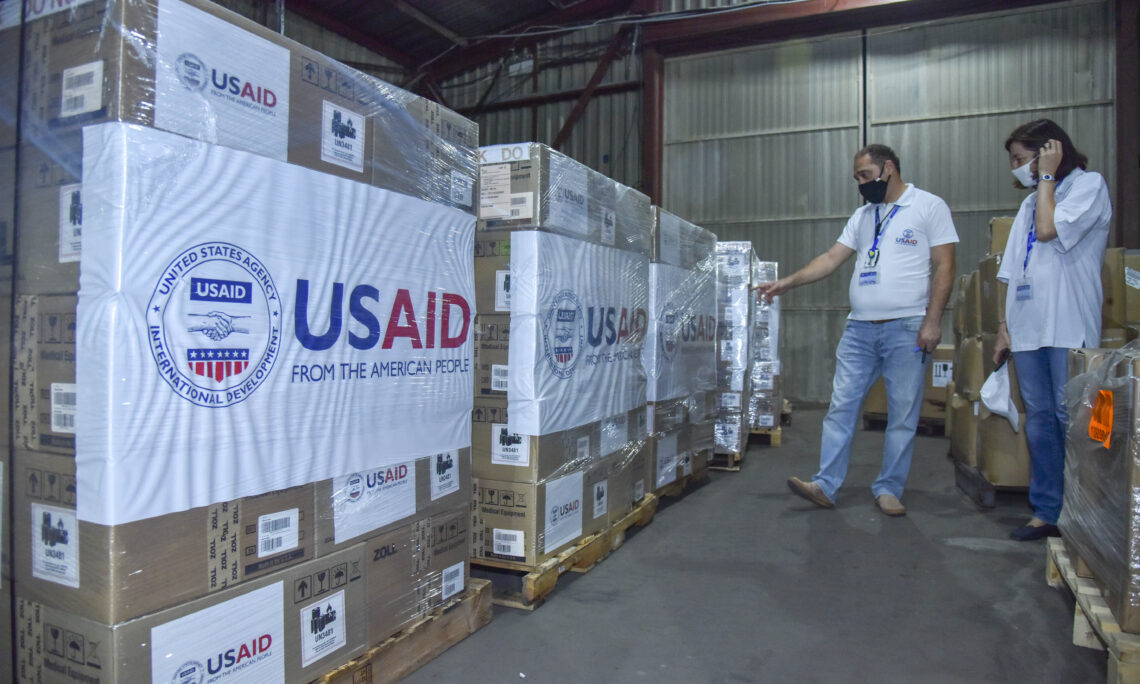 U.S. government assistance to Uzbekistan has increased 400% since 2016, reflecting the United States’ unstinting support for the ambitious efforts of the government and people of Uzbekistan to transform their country into a modern, just, and prosperous society.  What follows are some highlights of our programming in Uzbekistan:

USAID and the U.S. Center for Disease Control (CDC) have provided more than $9 million in emergency COVID-19 assistance, including technical assistance, lab and testing equipment, as well as 200 life-saving ventilators, deployed in hospitals around the republic.

In March 2020, USAID launched four new tuberculosis (TB) projects valued at more than $15 million over the life of the projects which will introduce new drugs and diagnostic technology while helping patients with drug resistant TB.

In 2020, USAID delivered over 130,000 kgs of high protein food assistance, distributed to more than 140 health and social protection facilities, to nourish some of Uzbekistan’s most vulnerable persons, including orphans and TB patients.

The U.S. NGO Mercy Corps began preparations for a $21.5 million/4-year program funded by the U.S. Department of Agriculture to support nutrition for mothers and children in vulnerable regions.

USAID provided over $100,000 in emergency humanitarian relief for the victims of the Syrdarya dam collapse.  In 2021, the U.S. Army Corps of Engineers plans to conduct a safety assessment of two high risk dams, and to conduct dam safety workshops.

Contributing to a More Prosperous Future

American experts funded by the U.S. Department of the Treasury are working with the Capital Markets Development Agency and the Ministry of Finance to support those agencies’ reforms, with the goal of modernizing economic management to improve transparency and attract investment.

USAID and the Department of Commerce organized the Regional Trade and Transport Forum in Termez, with representatives from 14 countries signing $600,000 in business deals.

Educating the Next Generation of Uzbekistanis

We are now in the second year of a five-year, $50 million program to support educational reform, with a focus on early grade reading, numeracy, and IT skills.  The United States is supporting advanced training for all of Uzbekistan’s English teachers, to improve the quality of instruction.

USAID deployed a world-class consultant to the Ministry of Public Education to advise on strategic planning, resource allocation, and mobilizing external resources, in support of the ministry’s ambitious reform program.

The U.S. Geological Service (USGS) is in the second year of a four-year program with the Uzbekistan State Committee on Geology and Mineral Resources to provide assistance in assessing Uzbekistan’s mineral reserves, supporting the development of the mining sector as an engine of economic growth.

The United States assisted Uzbekistan and its neighbors through the Smart Waters program to improve the management of transboundary water resources.

The U.S. Forest Service is conducting a $275,000 program to develop nature-based tourism in protected areas in Uzbekistan and worked with the UN Food and Agriculture Organization to promote sustainable pasture and rangeland management.

Strengthening the Rule of Law, for a More Just Future

We strongly support Uzbekistan’s efforts to combat trafficking in persons (TIP).  The U.S. supported Uzbekistani NGOs in working with law enforcement to repatriate 534 TIP victims in 2019 and to open 17 criminal cases, leading to the conviction of 42 traffickers.

Working through a local NGO, the U.S. supported capacity building for Uzbekistani law enforcement, judicial, and anti-corruption officials, as well as defense attorneys, through training and exchanges with U.S. and European legal experts.

Through a U.S.-funded program with the UN Office on Drugs and Crime, three Uzbekistani government forensics labs received international accreditation, a first for Uzbekistan, which will strengthen Uzbekistan’s criminal justice system.

The U.S. allocated $20 million in foreign military financing to assist the Ministry of Defense in enhancing the capabilities of its Special Operations Forces (SOF).  These funds will help provide top of the line equipment to combat terrorism and enhance border security.

The U.S. completed installation of over 100 Rapiscan metal detectors at border crossings and airports, improving border security while speed the processing of travelers.