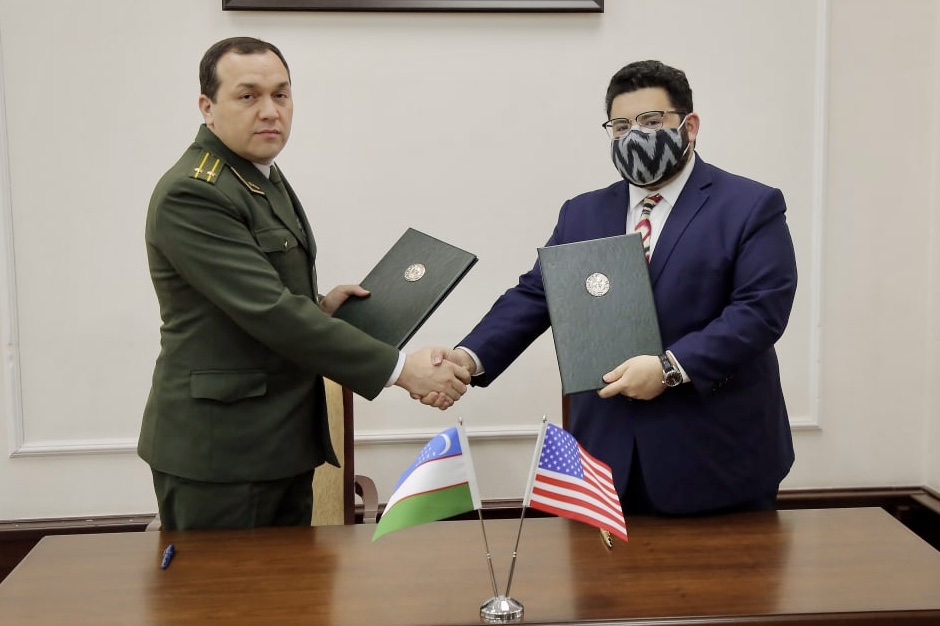 Tashkent—This week, the United States and Uzbekistan’s State Customs Committee (SCC) held a virtual handover ceremony to recognize the provision of new state-of-the-art equipment to support the SCC with counter-nuclear smuggling operations and modernized training capabilities.  The U.S. Department of Energy/National Nuclear Security Administration, through its Office of Nuclear Smuggling Detection and Deterrence (NSDD), transferred five new mobile radiation detection systems valued at over $1 million USD to enhance the SCC’s ability to interdict the smuggling of nuclear and radioactive material at key locations on Uzbekistan’s borders and internal regions.  Complementing this donation, NSDD, as well as the U.S. Department of State’s Export Control and Related Border Security (EXBS) Program, jointly provided SCC with a new suite of video teleconferencing and interpretation equipment to advance and modernize the SCC’s ability to conduct virtual training and workshop events with international partners and remote personnel across the country.  U.S. Chargé d’Affaires ad interim Paul Poletes and Uzbekistani State Customs Committee Deputy Chairperson Utkirjon Kodirov highlighted this important milestone as a strong example of U.S.-Uzbekistan cooperation on the occasion of the 30th anniversary of the founding of the State Customs Committee.

This equipment transfer is part of a long-term multi-billion-dollar global mission in which NSDD equips partner countries with the ability to detect, monitor and investigate potential nuclear smuggling efforts at strategic in-country thoroughfares or at country borders.  To date, NSDD has invested over $16 million USD in building counter-nuclear smuggling capacity in Uzbekistan, and since signing a Memorandum of Understanding with the SCC in 2017, this cooperation has grown significantly to develop the capabilities and infrastructure of the SCC to advance this mission.  Furthermore in 2021, the Memorandum was expanded to include numerous other Uzbekistani agencies to comprehensively develop counter-smuggling operations from interdiction to prosecution.  In parallel with this new equipment donation, last week NSDD and the Ministry of Emergency Situations co-hosted a landmark Exercise Development Workshop to improve Uzbekistan’s interagency exercise and response procedures following a nuclear smuggling incident.  Through these projects and activities, Uzbekistan remains one of the United States’ key partners in combating the smuggling of illicit nuclear and radioactive material.

The EXBS Program, administered by the U.S. Department of State, is designed to help address the proliferation of weapons of mass destruction, their delivery systems, related technologies, and other weapons.  In Uzbekistan, the Program comprises a wide range of nonproliferation export control assistance, from licensing and legal/regulatory technical workshops to the provision of equipment, and training for border control and enforcement agencies.  The equipment provided under this Program includes communications equipment, detection and inspection equipment, IT equipment, and vehicles.  Since 2000, the EXBS Program has donated over $20 million USD in equipment and training to the Government of Uzbekistan.