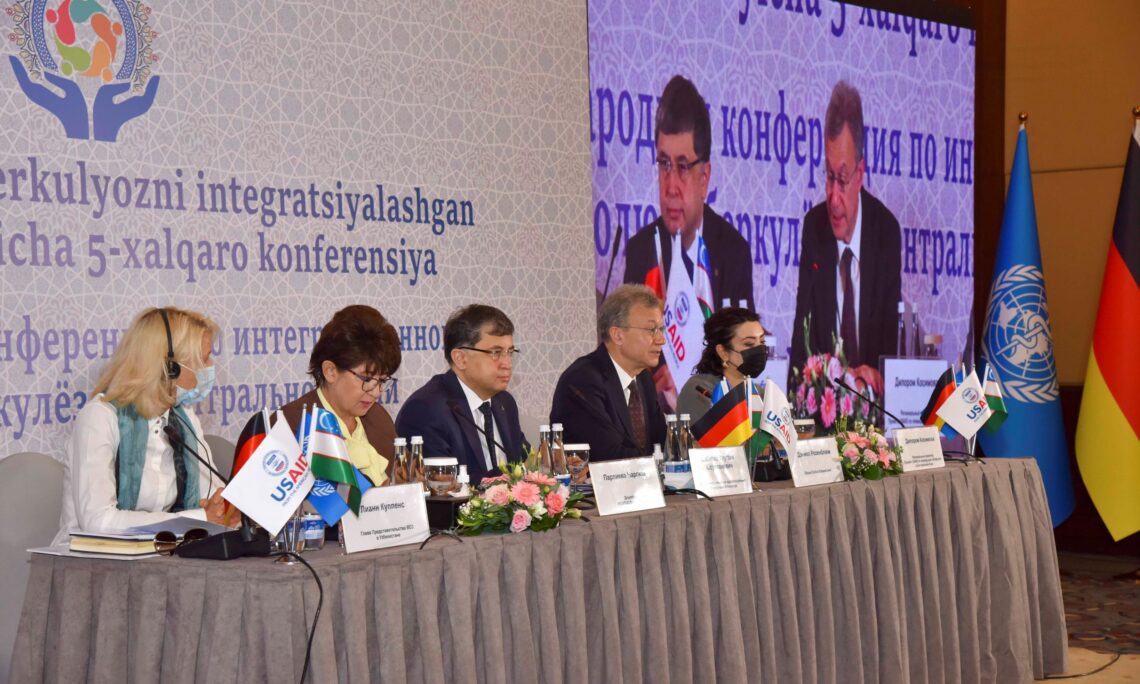 Tashkent, Uzbekistan, September 16, 2021 – Today, the fifth international conference on integrated tuberculosis (TB) control in Central Asia opened in Tashkent. The three-day event is organized by the Ministry of Health of Uzbekistan, and the Republican Specialized Scientific and Practical Medical Center for Phthisiology and Pulmonology, with support from the U.S. Agency for International Development (USAID), World Health Organization, KfW development bank, and the Stop TB Partnership.

The conference brings together more than 300 government officials and health professionals from Australia, Germany, Kazakhstan, the Kyrgyz Republic, Latvia, Moldova, Switzerland, Tajikistan, Turkmenistan, Ukraine, the United States, and Uzbekistan. The event serves to improve government capacity to operate and ensure sustainable financing of TB programs during the COVID-19 pandemic and address pandemic challenges to TB control.

Speaking at the event, U.S. Ambassador to Uzbekistan Daniel Rosenblum noted, “This conference demonstrates the important collaboration and commitment of the Central Asian governments to end the spread of tuberculosis – a deadly but curable disease. The United States is proud of the nearly three decades of partnership with the governments of the countries in Central Asia to eradicate TB. Our mutual efforts have significantly improved access to quality health care services and contributed to a considerable reduction in the number of TB cases and deaths compared to a decade ago.”

“The goal of the End TB Strategy is to reduce the incidence of TB by 50 percent and the number of TB-related deaths by 75 percent by 2025. The National TB Program of Uzbekistan aims to achieve the goals of the High-Level Meeting of the United Nations General Assembly on Diagnosis and Treatment of TB focusing on the drug-resistant TB, and TB among children. To date, more than a dozen of regulatory documents on TB control have been developed in close interaction and coordination with state and international organizations based on WHO recommendations. The level of treatment coverage for all forms of TB, including the drug-resistant TB, has reached 100 percent across the country, achieving 90 percent TB cure rate. Currently, the Ministry of Health of the Republic of Uzbekistan lays special emphasis on the priority of the preventive direction in the activities of medical and preventive institutions, aimed at early detection and prevention of the spread of tuberculosis and at creating universal access to diagnosis and treatment,”- said Professor Nargiza Parpieva, Director of the Republican Specialized Scientific-practical medical center for phthisiology and pulmonology of Uzbekistan.

Although the countries of Central Asia have made significant progress to limit the spread of TB, its drug-resistant forms remain to be in the high priority in the region. The COVID-19 pandemic has exacerbated the situation as patients have less access to be tested.

The United States partners with governments and various stakeholders throughout the region to fight this infectious disease. In Uzbekistan, joint efforts between USAID and the National TB Program have shortened multi-drug resistant TB diagnosis time from 90 days down to a few hours. In addition, to ease the negative impact of the pandemic on TB diagnosis, a new procedure has been developed to simultaneously test for TB and COVID-19.