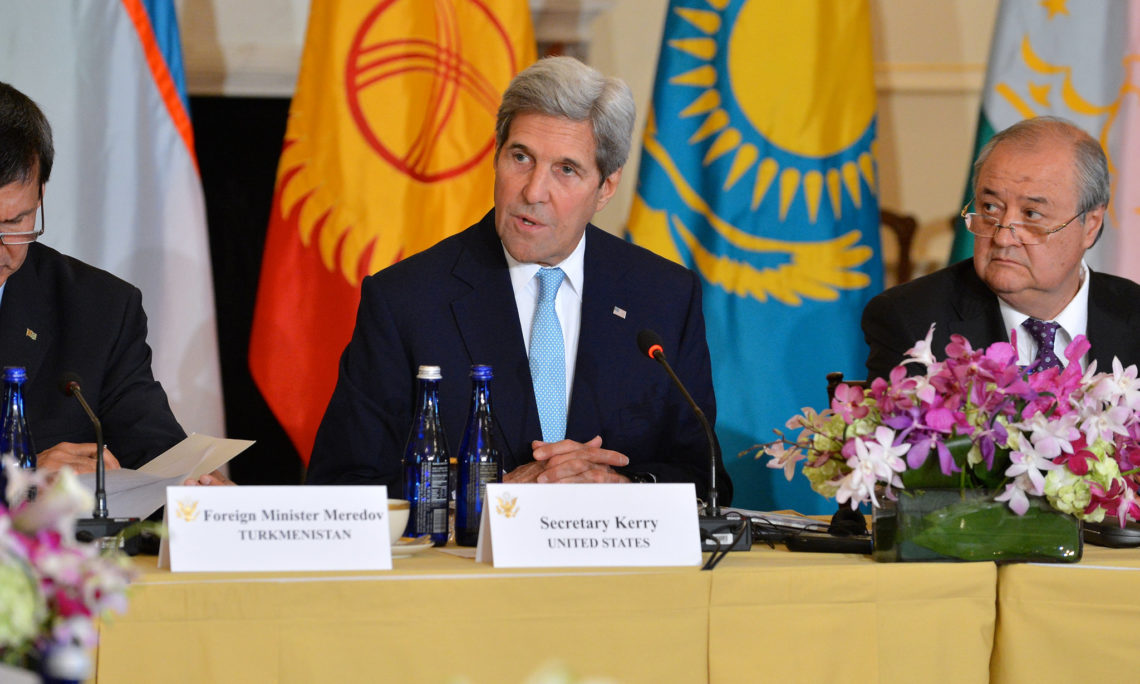 Secretary of State John Kerry at the Central Asia Ministerial

U.S. DEPARTMENT OF STATE
Office of the Spokesperson
For Immediate Release
REMARKS
August 3, 2016

At the Central Asia Ministerial

SECRETARY KERRY:  Well, good morning, everybody, and welcome to the State Department.

Last fall, we convened the first meeting of the C5+1 – we being the +1 – in Samarkand, which is an ancient crossroads of culture and commerce, where we discussed modern challenges of economic prosperity and global security and how to address them.  And the six of us engaged in a very frank and important dialogue about how best to counter violent extremism in each of our countries, how to spur sustainable growth across Central Asia, and how to reverse environmental degradation in the region and combat climate change worldwide.

It was really a precedent-setting meeting and I think the first time we have gathered the five Central Asian countries with the United States in an effort to figure out how we can cooperate more effectively and how we could engage in mutual development enterprises.  And in fact, we are now going to be able, in the course of the day, to announce major steps forward in that regard.

What our discussion showed was really how broad our relationships are, and they extend beyond just government cooperation to include partnerships between U.S. businesses and sectors in each of the nations represented here, all of which deal with clean energy, information technology, financial services, and more.  And this component of our collaboration is going to continue later today when each of the ministers here will meet with Energy Secretary Ernie Moniz and American executives in order to explore new opportunities for investment.

I think the fact that the six of us are sitting here like this in Washington talking about these issues underscores what President Obama and Prime Minister of Singapore Lee were saying yesterday about the global market and the realities of the global world, the global exchanges that we all are engaged in in today’s world.  More than anything, our inaugural gathering of this group established the C5+1 as a vital platform for action designed to protect our citizens, build shared prosperity, and strengthen the diplomatic ties between us.

So today, we hope to make further progress through a new regional approach built around initiatives on counterterrorism, trade and investment, economic development, and clean energy.  And one program that we will do is initiate a dialogue within the Global Counterterrorism Forum to assist Central Asian states in combating radicalization and reduce the threat that is posed by foreign terrorist fighters.  A second project is aimed at increasing trade in key sectors of our economies and making our economies more competitive.  A third will center on improving the transportation and logistics sectors that are essential to a healthy and a dynamic marketplace.  And finally, the U.S. will partner will each of the countries here to develop cleaner renewable energy sources that can power everybody’s future while reducing greenhouse gas emissions.

So we intend to support each of your nations as you adapt to the new standards that are needed to head off the threats that are posed by the warming of the planet by global climate change.  And to help these efforts get off the ground, I can announce today that the United States intends to invest $15 million in this initiative in order to make sure that we get it off the ground as rapidly and effectively as possible.

The cooperation in each of the areas that I have just talked about is essential, but make no mistake – our work together is not going to prevent us from continuing the dialogue that we’ve already engaged in on other issues of concern, including the need for transparency and accountability in governance and the importance of such basic human rights as freedom of religion, speech, and association.

What is clear is that all of the measures that we are going to discuss this morning are rooted in mutual interests, and they are focused on the same goal that has been at the forefront of our relationship for these past 25 years, and that is a focus on a region that is secure, prosperous, and well governed.  Every one of the steps that we are talking about grows out of a fundamental principle of our foreign policy: that we support without hesitation the sovereignty, the territorial integrity, and the independence of each Central Asian state.  And all of the states, I believe, and all of the principles that we are organizing around are intended to help form the foundation of a lasting partnership between the United States and your countries.

Meeting our shared aims is going to demand a common effort.  It’s going to demand working effectively together.  It’s going to demand a commitment.  It’s also going to demand our skill as diplomats.  A 11th-century poet, Yusuf Khass Hajib, once wrote, a diplomatic “envoy ought to be the choicest of mankind, wise, intelligent, and courageous” – describing everybody here, right?  (Laughter.)  Today that’s a high standard, obviously.  But I think that without any humor I would say that we need at this moment in the world’s current trajectory to find all the wisdom that we can and all the strength and courage that we can.  There are tough choices, but I am convinced that we can make great progress on all of the challenges that we share together.  And I really look forward to working with each and every one of you in that effort.

It’s now my pleasure to introduce the Turkmen Foreign Minister Rashid Meredov for his opening remarks, and then I’ll introduce each foreign minister.