Office of the Spokesperson

On October 24, Under Secretary Shannon will travel to Astana, Kazakhstan where he will meet with government officials and alumni of U.S. exchange programs. He will also visit the 2017 EXPO site and tour Kazakhstan’s National Museum. In Bishkek, Kyrgyzstan, October 26–27, Under Secretary Shannon will meet with government officials, members of parliament, and civil society leaders. He will speak at the American University of Central Asia, meet with the university’s C5+1 Youth Council representatives, and visit the Urkun Memorial. Finally, Under Secretary Shannon will travel to Tashkent and Samarkand, Uzbekistan to meet with senior government officials, business and civil society leaders, and visit several cultural heritage sites, including the Registan and the burial site of former president Islam Karimov.

Through Under Secretary Shannon’s trip, the United States looks forward to strengthening durable government-to-government and people-to-people ties with Central Asia. 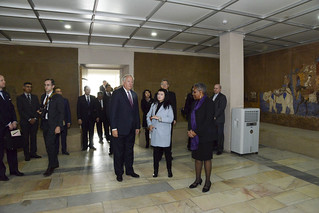