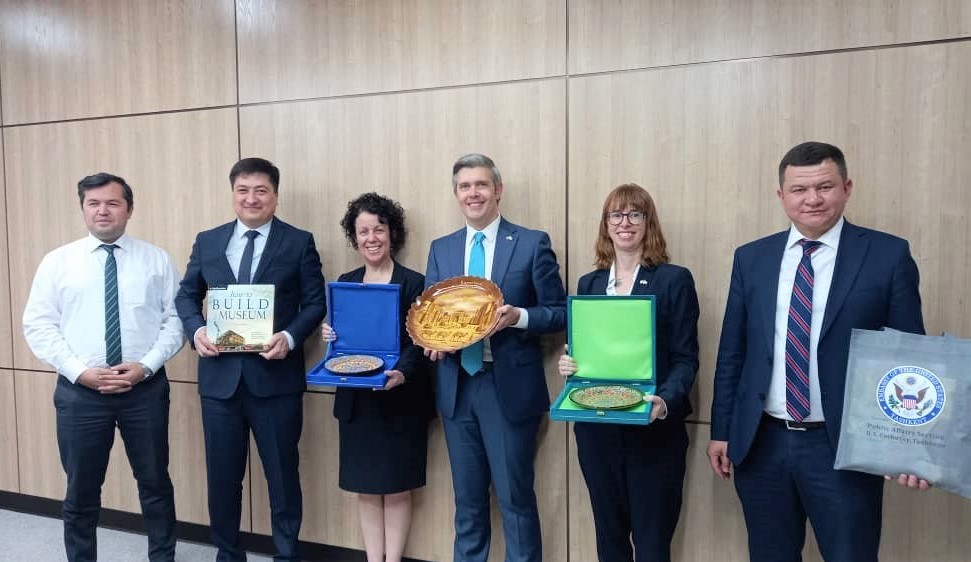 The visitors participated in meetings and conducted site visits in preparation for the Government of Uzbekistan’s request for a bilateral cultural property agreement (CPA) for archaeological and ethnological material.  If approved, the agreement would create import restrictions on certain types of cultural property into the United States and provide a framework for enhanced collaboration.  Import restrictions prevent looted objects from entering the United States and make it easier for the United States to return those objects to the country of origin.

Cultural property is a unique, nonrenewable resource that is important for learning about the diversity of human history and cultures.  Common types of cultural property include archaeological artifacts, rare manuscripts, and objects used in ceremonies.  These objects may be important for community identity and practices, recognized as part of a group’s cultural heritage, and protected by law or tradition.  The Cultural Heritage Center (CHC) plays a central role in developing U.S. policy and programs to protect cultural property from trafficking and promote the legal exchange of cultural property for international exhibitions and study.

Before the determination can be made to enter into an agreement, the CHC conducts in-depth research into a country’s cultural heritage.  The CHC delegation met with national services involved in the protection and management of cultural heritage and law enforcement agencies responsible for upholding and enforcing Uzbekistan’s laws.

During their visit, Catalfamo and Compton met with Uzbekistan’s Minister of Tourism and Cultural Heritage, Uzbek Customs officials, and the General Prosecutor’s Office and other stakeholders to create a roadmap for reaching a Cultural Property Agreement. “We [were] delighted to be in Uzbekistan to see first-hand its incredibly rich cultural heritage and applaud the government’s efforts to preserve and protect it,” remarked Catalfamo.

The United States has supported the preservation of Uzbekistan’s cultural heritage, primarily through the U.S. Ambassadors Fund for Cultural Preservation (AFCP).  The AFCP has awarded nearly $900,000 for 14 projects since 2001, including the conservation of the 19th century Tash-Hauli Palace in Khiva and the preservation of several collections and historic buildings in Bukhara, Samarkand, and Tashkent.