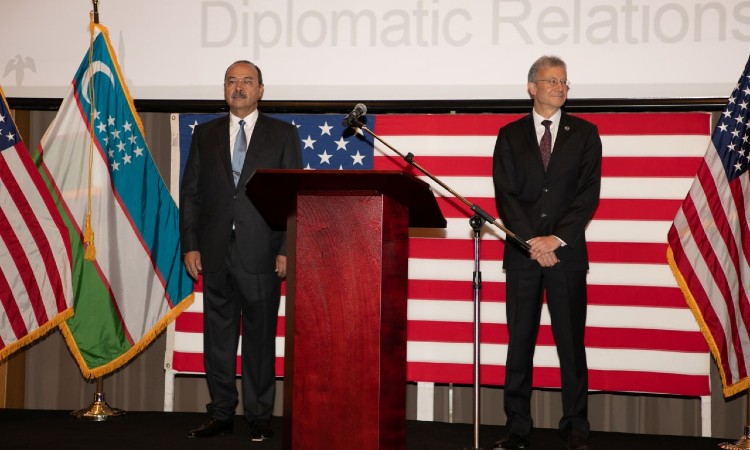 Ladies and Gentlemen:  The last time I spoke in this room, at our 4th of July reception three years ago, it was the 50th anniversary of the Apollo 11 moon landing.  I used the occasion to introduce everyone to my father, Louis Rosenblum, who had worked for 30 years as a scientist at NASA and helped the U.S. space program succeed.  My father had passed away three months earlier, and I wanted everyone to know who he was and what he had accomplished.

Tonight, in the interest of gender equality — and because I am very proud of her — I want to introduce you to my late mother, Evelyn Mull Rosenblum.  Evy Rosenblum was a lifelong educator, a school principal, and a civic activist, who raised four children of her own and had a huge impact on the learning and values of the many hundreds of other children she taught. She won awards for the curricula she developed for Jewish education.  She was active in voter education efforts through the non-governmental organization “League of Women Voters.” And her commitment to social justice and deeply felt empathy influenced everyone around her and made the world a kinder and gentler place.  She was also a staunch advocate of equal rights and opportunities for women, and always taught me to believe that a woman can do anything a man can do – and in most cases, probably do it better!

This year, the U.S. Embassy in Tashkent has undertaken a large number of initiatives to support gender equality and women’s empowerment in Uzbekistan.  We know that this is fully in line with the priorities of the Government of Uzbekistan, and in fact a number of these activities are being carried out jointly with the Government; others are aimed at the private sector, and especially women in rural communities, female entrepreneurs, and girls pursuing STEM education.  There is more information available about the U.S. Embassy’s “Year of Gender Equality” on our information tables in the next room – please learn about it!

Ladies and Gentlemen:  Whenever I speak publicly, I try to bear in mind the wise words of the French writer Andre Gide, who once remarked: “Everything that needs to be said has already been said.  But since no one was listening, everything must be said again.”

And so — in the spirit of Gide — when I began to write this speech, I remembered that this is already the fourth time I have made Independence Day remarks in Tashkent.  The first such time was on July 3, 2019 — in this very same ballroom.  During that speech I acknowledged that America is still a relatively young nation, while the people of Uzbekistan are directly connected through their ancestors to civilizations that are thousands of years old.  But – I said that day — even in our paltry 246 years, there are at least two important lessons Americans have learned:  first, that independence and sovereignty are precious and should never be taken for granted; and second, that independence is not enough — without freedom, and without good government, based on the consent of the governed, a nation will not thrive.

As I said one year ago in my video statement marking July 4, genuine national independence requires real sovereignty, meaning that a nation should be able to make decisions on its own, to decide how to organize its society and its economy.  Just as importantly, a sovereign nation gets to decide, without pressure and intimidation from outside, what kinds of relationships it wants to have with other nations.  I believe most Uzbeks and Americans share this opinion.  We get to decide what kinds of alliances or associations we want to form, according to how we assess our own national interests.

One year ago, when I said these words, I never imagined how relevant they would be for this year’s Independence Day.

The events of the past four months have shown, conclusively, the terrible human cost when sovereignty is violated, and that sovereignty, independence, and territorial integrity are principles of international relations that must be protected.  Without it, our world returns to the law of the jungle, to an international order where militarily powerful nations can impose their will on other nations, just because they have decided those other nations have no right to exist.

My colleagues and friends: as I stand before you today, I feel very fortunate to have a fourth chance to celebrate America’s Independence Day here in Tashkent.  What a joy, what a blessing to be able to do it this time in person — and to see everyone’s smiling face!  And it is now my great honor to offer a toast to our guest of honor, His Excellency, Abdulla Nigmatovich Aripov, Prime Minister of the Republic of Uzbekistan.  My toast is a wish for our two countries, strategic partners and friends for the past 30 years.