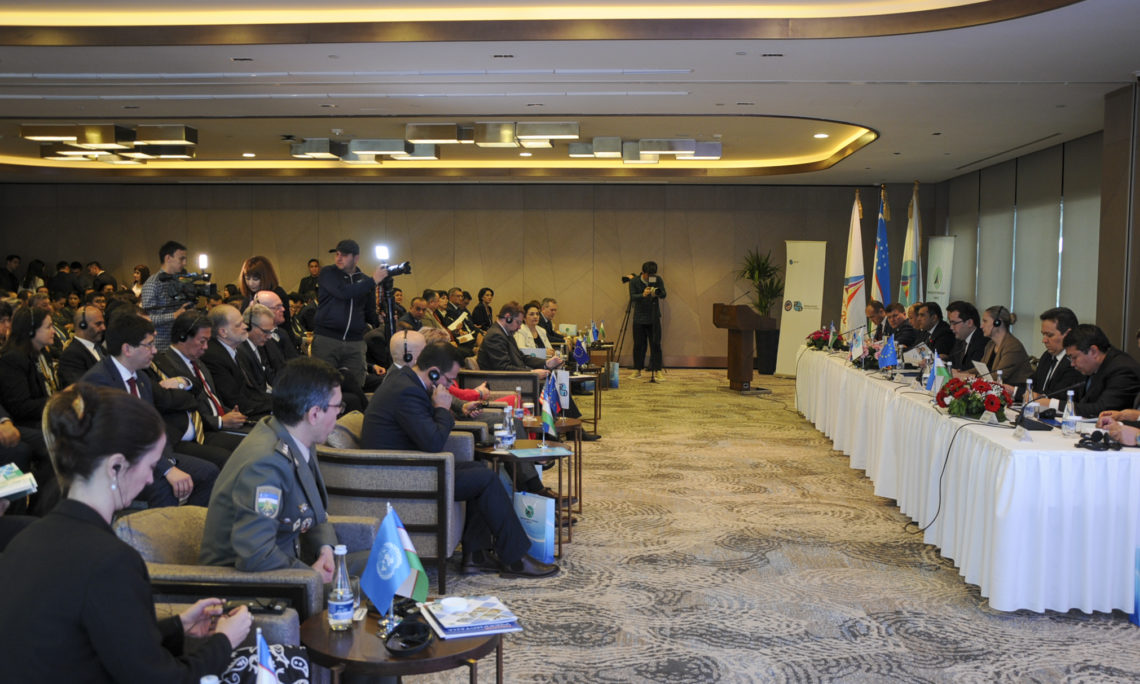 I would like to thank the Development Strategy Center and Regional Dialogue for inviting me today.  I am honored to speak alongside Executive Director Eldor Tulyakov, Deputy Prosecutor General Erkin Yuldashev, and Head of the Branch Office of Regional Dialogue Petra Gorjup.

In his January 24 address to Parliament, President Mirziyoyev called for “even greater activity of citizens in raising the effectiveness of reforms and in spearheading new initiatives on the ground.”  In that light, I want to thank the Development Strategy Center and Regional Dialogue for providing the initiative to take stock of the state of reforms in Uzbekistan and to talk about future priorities.

The Development Strategy Center has played an absolutely vital role in generating ideas and priorities for the government’s reform program, and I applaud its work.  For its part, the Government of Uzbekistan has no better foreign partner than Regional Dialogue in implementing anti-corruption and rule of law reforms.  Given Slovenia’s track record in reducing corruption, the organization has experience that simply cannot be found elsewhere.  As Uzbekistan seeks to continue its progress in the fight against corruption, it has an ideal partner in Regional Dialogue and the U.S. government is proud to be funding their work.

The current moment is a good time for a stock-taking of the state of reforms, as the past several months have been quite eventful, including Parliamentary elections and President Mirziyoyev’s address to the new Parliament.

Any discussion of reforms in Uzbekistan needs to start by acknowledging the tremendous progress that has already been achieved.  The United States is proud to be Uzbekistan’s partner in supporting its reform process.  As Secretary Pompeo noted in Tashkent just last week, our two countries have a rapidly growing partnership and we are pleased that we have been able to assist Uzbekistan in its progress on the path of reforms, especially as it confronts some difficult decisions.  As President Mirziyoyev noted in his speech, reforms in this country “are entering a decisive phase” in which the priority is to focus on producing real results for the people rather than resting on the successes of the past.

Building a modern democratic state is never an easy or quick task, and it requires constant and difficult work to sustain progress.  President Mirziyoyev described the keys to success as “the rule of law, effective anti-corruption, institutional capacity building, and the formation of strong democratic institutions.”  That short description precisely captures the task at hand.

The rule of law is important for many reasons but perhaps the most important is that no state can maintain the support of its people if it does not treat them fairly.  The administration of justice is one of the most basic tasks of the state.  We therefore commend the President’s call to pass new framework legislation for the justice sector, including the criminal and criminal procedural codes.

We urge the government to be as ambitious as possible in incorporating international standards and best practices into these new laws.  Incorporating international standards serves as a signal that Uzbekistan is serious about reform and its desire to create a competitive environment that can attract foreign investment – the type of foreign investment that is sustainable, creates good high-skilled jobs, and drives economic growth.  International standards reflect the experiences and lessons learned of numerous countries around the world with various legal systems and traditions and can spare countries in transition from unnecessary trial and error.

Perhaps the most important international standard related to the justice sector is a level playing field for prosecutors, judges and defense attorneys.  As Uzbekistan’s legal system evolves from its Soviet past, it is important to ensure that judges are truly free from political influence and that defense attorneys have the tools they need to defend their clients.

We once again commend Uzbekistan for hosting the UN Special Rapporteur on the Independence of Judges and Lawyers Diego García-Sayán and urge the government to be actively engaged on his recommendations when his final report is released this spring.  Likewise, we continue to support the work of the Chamber of Advocates as it seeks to strengthen its institutional capacity and ability to support the role of advocates in defending the citizens of Uzbekistan in the court system.

Strengthening the rule of law is an enormous task that requires overcoming bureaucratic resistance from entrenched interests and those that fear change.  As the President has noted, one of the biggest obstacles is corruption.  If individuals in the government do not obey the law, why should the people?  Yet fighting corruption is a very complicated issue and simple declarations are not sufficient to produce meaningful results.

Here again, details matter and international standards can help.  Uzbekistan underwent a fourth round of peer review by the OECD’s Anti-Corruption Network for Eastern Europe and Central Asia in 2018, resulting in a report with 47 recommendations.  Uzbekistan should build its institutional capacity to fight corruption by earnestly implementing these recommendations, including such practices as asset declaration and protection for whistleblowers.  We look forward to further details on the new anti-corruption agency mentioned by President Mirziyoyev in his January 24 speech and hope it will play a meaningful role in investigating and prosecuting corruption cases.

And finally, strong democratic institutions include a healthy partnership between the government and civil society organizations.  The government cannot do everything by itself and needs the creativity and support of civil society to succeed in its reform efforts.  As Secretary Pompeo noted on last year’s International Day of Democracy, “Nations are more secure, peaceful, and prosperous when civil society engages freely and participates in democratic processes without intimidation.”

It is therefore vital that Uzbekistan adopt legislation governing NGOs that conforms to international standards, signaling its commitment to an environment in which civil society organizations can operate freely, efficiently, and without unnecessary government interference, making an important contribution to Uzbekistan’s reforms.

Organizations such as the Development Strategy Center and Regional Dialogue are perfect examples of the benefits of a free civil society – they work to create venues like this one where ideas can be debated, compromises can be forged, and solutions found to some of society’s most difficult problems.  We therefore urge the government to continue expanding the space for civil society by removing existing barriers to the work of such organizations.

In conclusion, I thank you again for inviting me to speak to you today.  I know that I speak for Ambassador Rosenblum when I say that the United States is honored to continue expanding our partnership with Uzbekistan, including through events like today’s, which are vital to ensuring that the reform process maintains its momentum.

I wish you all the best in today’s discussions which I hope are substantive, engaging, and challenging.  Katta rahmat!