Assalomu alaykum!  Dobroye utro!  Good morning to everyone who came to our “Uzbekistan convention” to watch the U.S. election results.  We are glad to see you this morning.

We know that it is early and it is cold out there, but that did not stop you, just as it has not stopped millions of Americans who have gone out to vote.

I would like to say a special word of welcome to our guests from the Parliament of Uzbekistan — we are glad to see you this morning; from civil society, from the Ministry of Foreign Affairs, from other parts of the Uzbek Government, students and teachers.  We are happy to see all of you.  I would also like to welcome my diplomatic colleagues.  I know there are a number of ambassadors and their staffs here.  We are glad to see you this morning.  We are glad to welcome our American citizens who are resident here in Tashkent and who have come here this morning.

So, we are here, ladies and gentlemen, to watch democracy in action!  Democracies depend on the interest and active participation of citizens who vote  — the electorate.  As you know, because some of you have followed our election in the United States, this election season provided voters with a very clear-cut choice and it stimulated a great deal of engagement and debate.

Things do change and I would say that voting today is very different from when I first started voting.  I was part of the group of 18-year olds who were able to vote for the first time, way back in time — I would not even say when that was (laughter). But, all day in America, and right now in the Western U.S. states, average Americans have been exercising their right to vote, and in doing so influencing – in their own small but powerful way – the future of our nation.

I think it is important to point out that Americans are voting not just for the President — that is clearly the most important race — but they are also voting in many cases for Senators as well as members of the House of Representatives and many, many other state and local offices.  In addition to voting for state legislators and governors, voters may be asked to approve the issuance of bonds to finance infrastructure or on policies that affect their state or city.

All elections are important and they are the cornerstone of any democracy.  However, in the American system, a presidential election comes once in four years.  That makes today very special.  Of course, it goes without saying that the Presidency is the highest office in the United States, a position that only 44 Americans have held in the 240-year history of our nation.

Americans live in a free society, a society in which our Constitution guarantees rights, including the freedom of expression and, of course, the right to vote. While Americans may differ by questions such as whether they are Republicans or whether they are Democrats or members of other parties, what we are united in is valuing our free and democratic society and our right to vote which, as I said, are rooted in the U.S. constitution.

I have enjoyed watching some of you who have your “I voted” stickers on.  We have a booth back in the back if anybody still wants to cast an imaginary vote.  You can put your vote in the little urn there to make a choice.  So, please participate. It is all in good fun.

Also, please take advantage of the displays.  I want to commend our Public Affairs staff for bringing so many different things that show the history of our elections in the United States around the room; and if anybody wants to understand the mysteries of the Electoral College — because in every state we are not directly voting for the President, we are voting for electors who will choose, and 538 electoral votes that will be divided among the candidates.

I want to note that elections are also very important because sometimes Democrats win and sometimes Republicans win.  In my career as a diplomat in the State Department, I have served Republican Presidents and Democratic Presidents, so we are prepared as diplomats to serve the President, whoever that is. But, I think the main thing is to give you a chance to watch our democracy in action.  You can see that many states are too close to call, the polls are still open some places so we are going to have a very exciting morning, and we are glad you are here to share it with us.

So, I can hear the buzz in the room, saying that everybody wants to be able to express his/her opinion, so I will stop talking and we will get back to watching the results and talking to each other.  Again, thanks for coming on this very special day for the United States, Election Day.  Thank you very much! 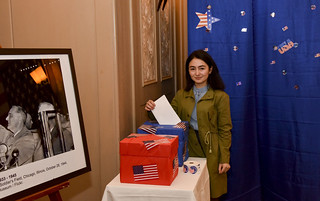