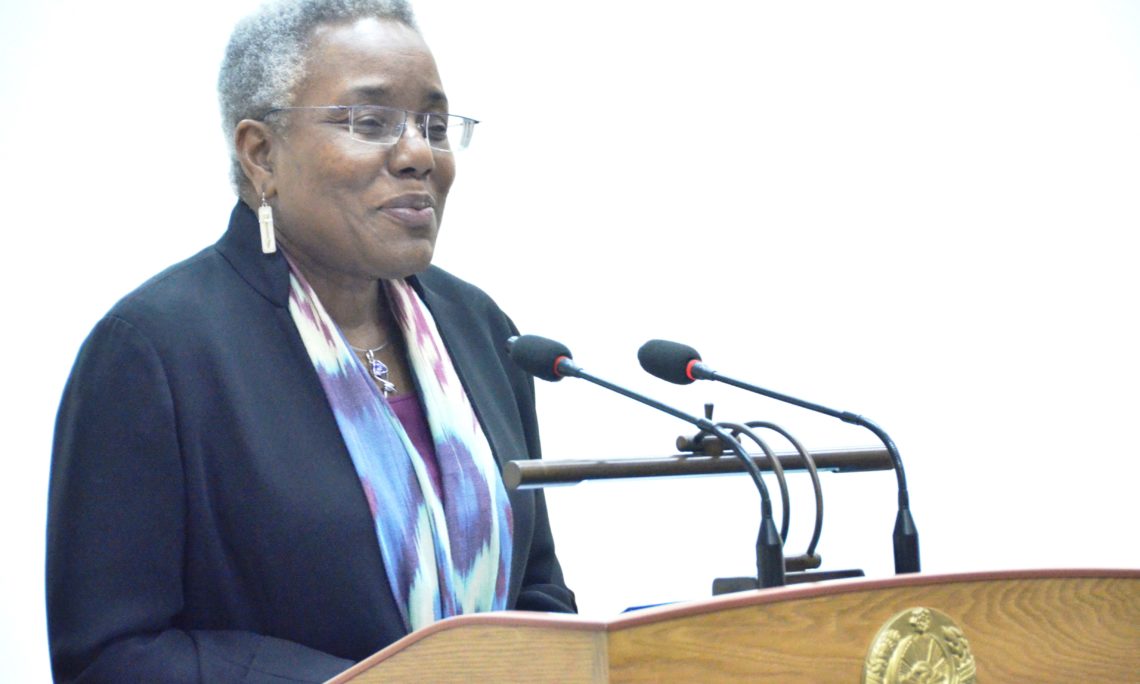 I’m pleased to be here among distinguished company at the University of World Economy and Diplomacy.  Thank you, Dr. Abdumalik Djumanov, for arranging this talk.

As U.S. Secretary of State Rex Tillerson noted on the recent occasion of the 26th anniversary of Uzbekistan’s independence that the United States and Uzbekistan have partnered on a range of issues to promote regional stability, security, and prosperity.

Secretary Tillerson said that our partnership has grown stronger each year, and we look forward to even closer cooperation in the future.  The United States continues to affirm our support for Uzbekistan’s independence, sovereignty, and territorial integrity.

As students of diplomacy, international law and international relations, you all know that Uzbekistan enjoys bilateral relationships with most independent countries in the world, just as the United States of America does.

But today, I would like to talk to you about the role of multilateral diplomacy.  Let us think beyond one-to-one relationships between two nations.

Let us think bigger, broader, more globally about the role of many countries working together towards our common goals, toward our common humanity.

Let us think more broadly about how our interconnected web of peoples, of nations, of states can and does work together for peace, prosperity and improving the human condition.

In his speech, President Mirziyoev pledged to focus his government on bringing greater prosperity and human rights to his nation and the Central Asian region.

The president said his government would work to create a peaceful and economically prosperous Central Asia.  In his words, Central Asia will become [quote] “a zone of stability, sustainable development, and good-neighborliness.”  [end quote]

Promoting stability and keeping the peace are at the heart of the United Nations’ mission.  The very first words of the U.N.’s charter are “to maintain international peace.”

The United Nations emerged at the end of the Second World War, the most destructive conflict in the history of the world.

The United States of America, together with our allies, including the then-Soviet Union, emerged victorious.

In that victory, we vowed to come together to prevent dictators and demagogues from ever again threatening the peace that we had won through our shared sacrifice.

As President Harry Truman said at that time, we were called upon to forge—in his words— “a mighty combination of nations founded upon justice and peace.”

But promoting peace requires more than words, it requires action.

Most of the planet’s nations working together have focused their energy through the United Nations in three key areas of action:  development, peace and security, and human rights.

Working multilaterally on development, the members of the United Nations have sought to address global poverty.  Only 20 years ago, nearly 40 percent of the developing world’s population lived in poverty.

Since then, the United Nations’ Millennium Development Goals have helped guide successful efforts to cut extreme poverty in half.

The U.N.’s 2030 Agenda for Sustainable Development, which Uzbekistan and the United States have endorsed, aims to end poverty and hunger, empower women and girls, and take “urgent action” to combat climate change, among other goals.

Finally, the United Nations is our beacon and touchstone on human rights.  In 1948, the Universal Declaration of Human Rights highlighted the importance of human rights in international law.

This is just one of the many ways the U.N. promotes and protects human rights around the world.

These are noble goals, with broad aims.

You, as students of diplomacy and international relations, can understand the importance of promoting development, peace and security, and human rights.

None of these lofty, ambitious goals can be accomplished by any one nation—even a nation as gifted and as proud as our own.

For today’s challenges and those of tomorrow, it will take the collective efforts of the best and the brightest of every nation, to work together.

This is your challenge, and your opportunity.

Thank you for inviting me here today to speak with you.  And thank you for your attention.

Now, I know you, as students of international relations, international law, and diplomacy, will have a lot to say about the issue of multilateral diplomacy.  I would like to hear what you have to say, and I welcome your questions.

Thank you.  What questions do you have for me today?  What is on your mind at this juncture in history?