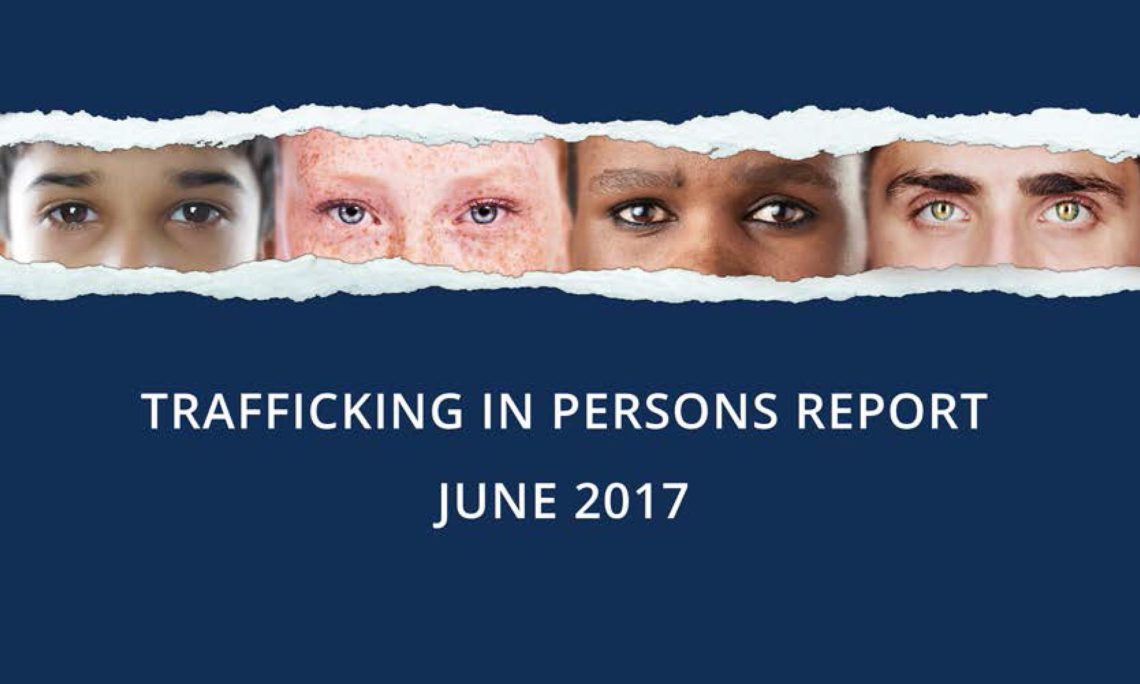 The Government of Uzbekistan does not fully meet the minimum standards for the elimination of trafficking and is not making significant efforts to do so; therefore, Uzbekistan remained on Tier 3. Despite the lack of significant efforts, the government took steps to address trafficking including allowing the ILO to monitor the cotton harvest for child labor since 2013 and for forced labor since 2015, and to publish the results of a survey on labor recruitment practices during the 2014 and 2015 cotton harvests. The government also conducted a substantial campaign to raise awareness of the prohibition against child labor in the harvest for a third year. Authorities continued to prosecute suspected traffickers involved in transnational cases and fund a rehabilitation center for trafficking victims. Government-compelled forced labor remained widespread during the 2016 cotton harvest. The central government continued to demand farmers and local officials fulfill state-assigned cotton production quotas, and set insufficiently low prices for cotton and labor to attract a sufficient number of voluntary workers, which led to the wide-scale mobilizations of adult laborers. There were anecdotal reports of the continued use of child laborers in some locations. Attempts to conceal possible labor violations in cotton fields continued; there were several incidents in which provincial officials harassed independent monitors and isolated cases of monitors being detained and questioned. For the first time, in 2016, the government investigated cases of child labor.

Take substantive action to end the use of forced adult labor during the annual cotton harvest, through such measures as eliminating cotton production quotas and increasing remuneration and improving working conditions for workers in the cotton harvest; continue substantive actions to fully eliminate forced child labor from the annual cotton harvest; respecting due process, increase investigations and, when sufficient evidence exists, criminally prosecute officials complicit in human trafficking, including officials involved in mobilizing forced labor; grant independent observers full access to monitor cotton cultivation and fully cease harassment, detention, and abuse of activists for documenting labor conditions, and investigate, and, when sufficient evidence exists, criminally prosecute persons complicit in human trafficking identified by observers; continue implementing the national action plan for improving labor conditions in the agricultural sector; modify agricultural policies to reduce pressure for farmers and officials to compulsorily mobilize labor for the cotton harvest; implement commitments to not mobilize teachers, medical workers, and college and lyceum students; provide adequate mechanisms to enable students and state employees to refuse to participate in the cotton harvest without suffering consequences; continue promoting awareness of labor rights, including in regard to the cotton harvest; continue improving processes for registering and investigating violations of labor rights; continue efforts to investigate and prosecute suspected traffickers, respecting due process; fund anti-trafficking NGOs assisting and sheltering victims who were not admitted to the state-run shelter; develop formal mechanisms to ensure victims are not penalized for acts committed as a result of being subjected to trafficking, including for illegal border crossing and losing personal identification documents; amend the criminal code to protect the identities of trafficking victims, and encourage prosecutors to proactively seek victim restitution in criminal cases; and continue to improve procedures for identifying trafficking victims to ensure they are systematic and proactive.

The Ministry of Interior (MOI) maintained an investigatory unit dedicated to trafficking crimes. The government provided trafficking-specific training to police, judges, and other authorities. Despite widely reported and credible evidence of official complicity in the cotton harvest and other sectors with forced labor, the government did not report any criminal investigations, prosecutions, or convictions of government officials complicit in human trafficking offenses this year. It did report issuing administrative fines to nine officials for forced labor violations.

The government maintained efforts to identify, assist, and protect victims of sex and transnational labor trafficking, but made only limited efforts to assist victims of forced labor in the cotton harvest or other domestic sectors. The government identified 714 victims of trafficking-related crimes in 2016, a decrease from 924 in 2015 and 1,208 in 2014. Of these 714 victims, 193 were exploited within the country, while the remaining victims were Uzbek citizens exploited in other countries. The government identified 29 victims of foreign origin and reported that the majority of identified victims, whether Uzbek or foreign, were subjected to labor trafficking. NGOs and an international organization identified and assisted 327 trafficking victims in 2016 (774 in 2015 and 847 in 2014). Uzbekistan’s diplomatic missions abroad helped repatriate 109 victims by issuing travel documents, a decrease from 146 in 2015. The government lacked a standardized process to proactively identify victims from vulnerable populations and refer those victims to protective services, especially those subjected to internal trafficking. Police, consular officials, and border guards who were able to identify potential trafficking victims could refer them to either a state-run shelter or NGOs for services. To be eligible to receive government-provided rehabilitation and protection services, victims must file a criminal complaint with the authorities in their community of origin, after which the MOI can decide to initiate an investigation and grant official victim status to the individual. NGOs have reported that local officials regularly refer victims who do not wish to pursue a criminal case to their offices for assistance.

The government allocated approximately 496 million soum ($150,940) in 2016, an increase from approximately 459 million soum ($139,680) in 2015, to operate its Tashkent-based trafficking rehabilitation center for men, women, and children with official victim status, which assisted 460 victims in 2016, a decrease from 503 victims in 2015. This center provided shelter, medical, psychological, legal, and job placement assistance. Victims could discharge themselves from the shelter, although in previous years, authorities at times required victims to stay to assist a criminal case. The center could accommodate foreign victims, but there have been no foreign victims in the shelter since its opening. The government provided funding to local NGOs to conduct vocational trainings and provide health services for victims, in addition to according them tax benefits and the use of government-owned land. These NGOs provided critical services because officials referred to them victims of sex trafficking and those who did not wish to pursue a criminal case and were therefore ineligible to access the state-run shelter. The law does not exempt transnational sex and labor trafficking victims from facing a criminal penalty for illegally crossing the border. However, NGOs previously reported authorities dropped these charges when NGOs proved to authorities the victims were subjected to human trafficking, and no reported victims had faced these penalties in the past two years. NGOs also noted that MOI officials increasingly complied with legal requirements to maintain victim confidentiality; however, victims’ identities were not kept confidential during court proceedings. In 2016, a trafficking victim received court ordered restitution for the first time in Uzbekistan, although victims generally lacked an effective mechanism to seek restitution from their traffickers; victims could bring civil suits against traffickers, but the government did not provide legal representation for victims, and most victims could not afford legal representation on their own.

The government did not take sufficient steps to modify agricultural policies that create pressure for the use of forced labor, including production quotas and low wages for workers. However, the 2016 harvest marked the third consecutive year the government conducted a nationwide campaign to raise public awareness of its prohibition of child labor in the cotton harvest. The central government continued to demand farmers and local officials fulfill state-assigned cotton production quotas, leading to the wide-scale mobilization of adult forced labor. The government did not follow through on commitments to end the mobilization of teachers, students, and medical workers. Officials required state employees and adult students to sign labor agreements or statements that they would pick cotton voluntarily. For a second consecutive year, the government agreed to allow the ILO to monitor the cotton harvest for child and forced labor, allowed ILO monitors access to the cotton fields accompanied by government monitors, and allowed the ILO to publish the results of a survey of agricultural recruitment practices during the 2014 and 2015 harvests. The government publicized its newly established telephone hotlines, receiving over 5,800 inquiries and complaints, of which, 1,325 complaints were received during the cotton harvest. Of the complaints received, 56 were related to forced labor and eight resulted in the discovery of confirmed child labor cases.

The government slightly reduced the area of land available for the cultivation of cotton and increased its capacity for mechanization by continuing to develop appropriate cotton cultivars and by training farmers on mechanization. The government also committed to several projects aimed at modernization of the cotton industry including a five-year partnership on agricultural reform with the World Bank, including measures to prevent forced labor; a four year Decent Work Country Program extension to improve employment opportunities, working conditions and social protections; and pilot projects with the International Finance Corporation and private companies to work on mechanization and responsibly cultivated cotton. Additionally, the government committed to implementing ILO recommendations on addressing the risks of forced labor in pilot project areas.

The national government conducted monitoring visits and provided training to a national network of local-level commissions. Authorities promoted wide-scale public awareness efforts on transnational sex and labor trafficking, including through events, print media, television, and radio, often through partnering with and providing in-kind support to NGOs. The government did not conduct efforts to reduce the demand for commercial sex acts. In addition to attending state-funded training, government officials participated in seminars and conferences sponsored by the government and taught by NGOs, international organizations, and foreign governments.

As reported over the past five years, Uzbekistan is a source and destination country for men, women, and children subjected to forced labor and women and children subjected to sex trafficking. Government-compelled child labor was phased out in 2015, although there were anecdotal reports of the use of child labor in some areas. Government-compelled forced labor of adults, including employees of schools and medical facilities, remained widespread during the fall cotton harvest, spring planting and weeding, and for other agriculture and construction projects. Credible international reports indicate some adults who refuse to pick cotton, do not pay for a replacement worker, or do not fulfill their daily quota can face the loss of social benefits, termination of employment, or other forms of harassment. Private companies in some regions mobilized employees for the harvest under threat of increased government inspections of and taxes on their operations. There were anecdotal reports of officials mobilizing classes of students aged 11 to 15 years in some regions, in contravention of the central government’s prohibition on child labor. Mobilizations of university and third-year college and lyceum (equivalent to a U.S. high school) students, who tend to be 18 years old but include some 17 year olds, continued in 2016. Independent observers reported that, in recent years, forced mobilization of adult workers increased to compensate for the loss of child workers.

There were isolated reports stating that local officials forced farmers to cultivate silk cocoons and, separately, that local officials forced teachers, students (including children), private businesses employees, and others to work in construction and other forms of non-cotton agriculture and to clean parks, streets, and buildings. Authorities harassed, threatened, arrested, detained, interrogated, and physically abused independent activists attempting to observe the spring weeding season and the fall harvest.

Uzbek women and children are subjected to sex trafficking in the Middle East, Eurasia, and Asia, and also internally in brothels, clubs, and private residences. Uzbek men, and to a lesser extent women, are subjected to forced labor in Kazakhstan, Turkey, Russia, United Arab Emirates, and Ukraine in the construction, oil and gas, agricultural, retail, and food sectors.