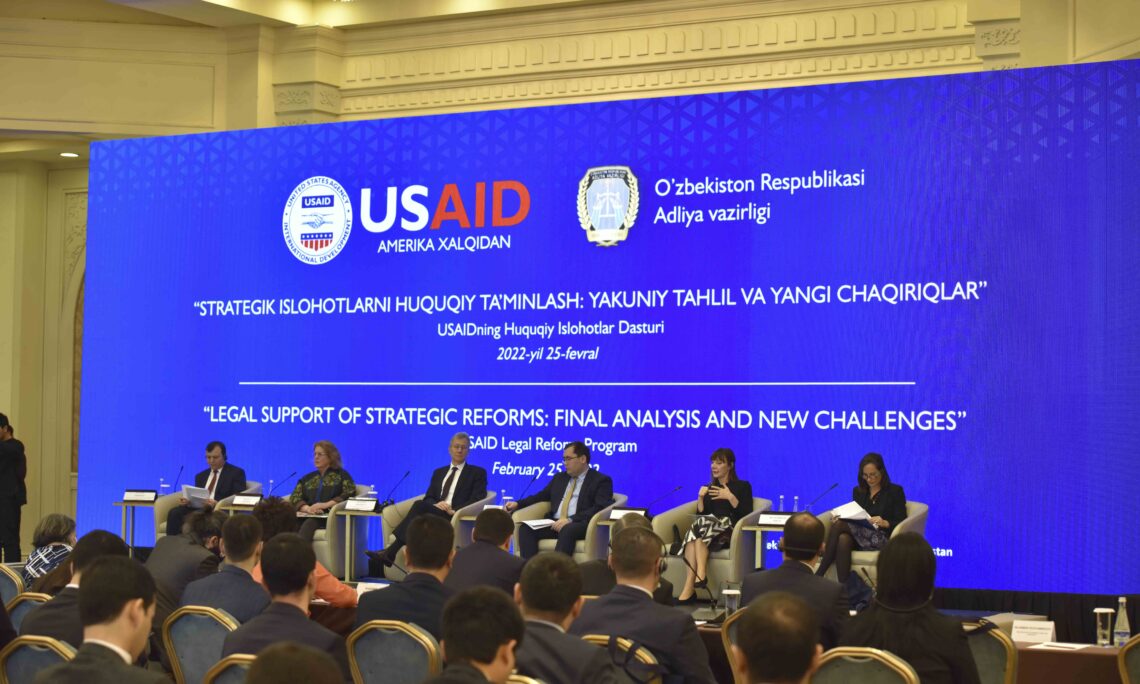 Friday, February 25, 2022 – Today, the conference “Legal Support of Strategic Reforms: Final Analysis and New Challenges”, organized by the Ministry of Justice of Uzbekistan, took place in Tashkent. The event, supported by the U.S. Agency for International Development (USAID), brought together around 150 representatives from Parliament, the Cabinet of Ministers, international experts, and national and international institutions, including civil society organizations and the media.

The conference served to analyze the legal aspects of the implementation of Uzbekistan’s comprehensive development strategy (National Action Strategy for 2017-2021). Under this strategy, numerous laws and regulations were introduced or re-written in support of the government’s drive to reform and modernize Uzbekistani society in many of its economic, political, legal, educational, and other aspects. During the event, participants reviewed progress and trends in law-making and regulatory actions, and the digitalization of legislative activities, among other topics. The participants also discussed the new tasks and challenges facing the legal community under Uzbekistan’s strategy for the next five years, Development Strategy of the New Uzbekistan for 2022-2026.

Speaking at the event, the U.S. Ambassador to Uzbekistan Daniel Rosenblum stated: “The United States is proud to support these development processes and ongoing sweeping legal, economic, social, and educational reforms, aimed at ensuring the well-being of each and every citizen in the country, while Uzbekistan is gaining a stronger voice and standing in the international arena.” He added: “The new strategy is an important follow-up to the 2017-2021 National Action Strategy and sets the way forward  for implementing the Government of Uzbekistan’s ambitious reform agenda.” USAID’s Mission Director Mikaela Meredith said, “Adhering to the Rule of Law in any country is important because it is the foundation of justice, opportunity, and peace. Rule of Law also underpins development, accountable government, and respect for fundamental rights.”

USAID partners with the Government of Uzbekistan to diversify the country’s economy and increase regional trade, address serious health threats – including COVID-19 – and build the government’s capacity to respond to the population’s needs. For more information, please visit: https://www.usaid.gov/uzbekistan and Facebook page: https://www.facebook.com/USAIDUzbekistan.