The U.S. Embassy Tashkent is pleased to announce that the United States Air Force Band, Starlifter, will visit Uzbekistan June 24-July 2, 2017.  Starlifter is a seven-piece group of talented musicians, which performs virtually every musical style, from Rock and Pop to Jazz and Country, to great contemporary and traditional songs.

On June 29 at 18:30, the band will give a public concert at the U.S. Embassy’s Old Chancery in Chilanzar.  On June 30, Starlifter will also perform at a reception in honor of U.S. Independence Day, to be held at Hyatt Regency Hotel.  During its stay in Uzbekistan, the group will also meet with Uzbek youth and mass media.

Starlifter is a component of the United States Air Force Band of Mid-America.  The band performs worldwide but is based out of Scott Air Force Base in Illinois.

To register for the 29 June concert in Chilanzar, please send an email with your name (first and last), date of birth, passport series and number to Tashkent-Program@state.gov by 6 p.m. on June 27, 2017.  The registration confirmation will be sent by email only.  No phone calls for registration will be accepted.  Please note that there is limited number of seats. 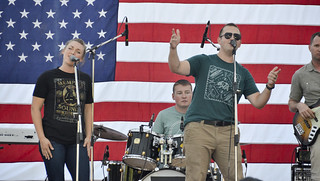