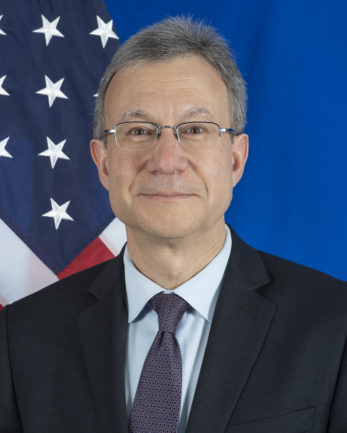 Daniel Rosenblum was sworn in as U.S. Ambassador to Uzbekistan on May 9, 2019. From July 2014 until July 2018, Mr. Rosenblum served as Deputy Assistant Secretary in the State Department’s Bureau of South and Central Asian Affairs. His responsibilities included managing U.S. policy and diplomatic relations with the five Central Asian states: Kazakhstan, the Kyrgyz Republic, Tajikistan, Turkmenistan and Uzbekistan. He directed State Department support for six diplomatic missions in the region, helped set policy and programmatic priorities, and frequently served as public spokesperson. During his last year in this position, Mr. Rosenblum also oversaw all the Bureau’s regional and public diplomacy activities, including transnational economic and security issues, educational and cultural exchanges, and outreach to the media in both South and Central Asia.