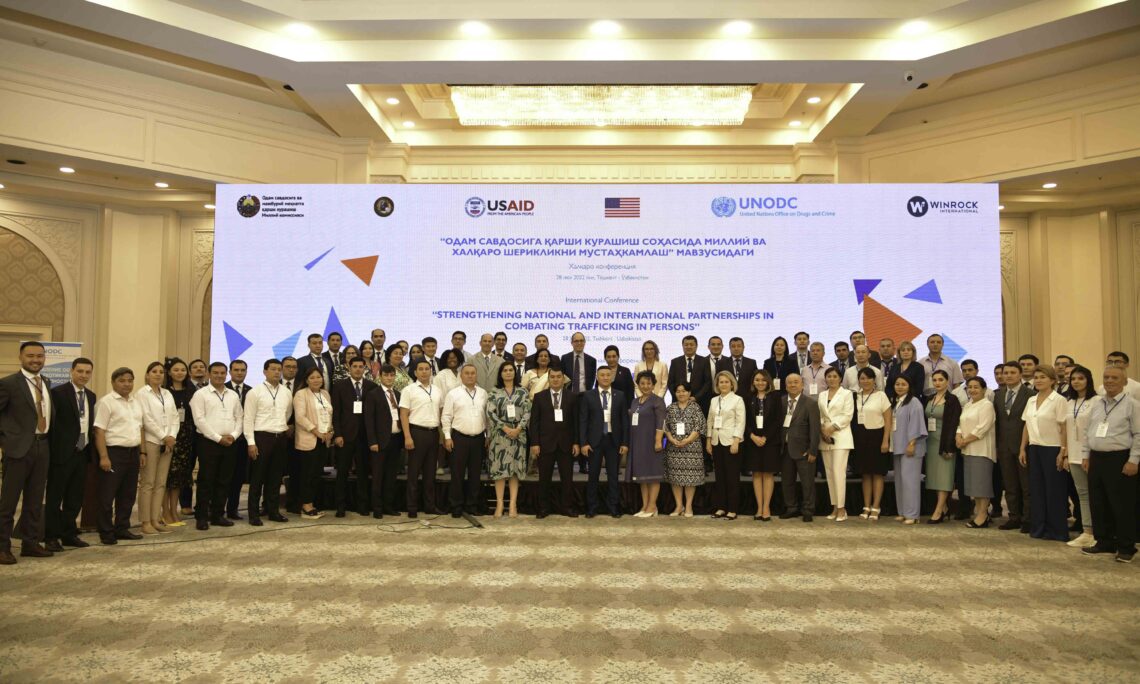 July 28, 2022, Tashkent, Uzbekistan – The U.S. Agency for International Development (USAID)’s Safe Migration in Central Asia activity and the U.S. Department of State Bureau of International Narcotics and Law Enforcement Affairs (INL) in partnership with the National Commission on Combating Trafficking in Persons (CTIP Commission) and Forced Labor of the Republic of Uzbekistan organized an international conference on combating trafficking in persons (CTIP). The conference, which was led by the CTIP Commission, enabled law enforcement agencies from Uzbekistan, Kazakhstan, Kyrgyzstan, Tajikistan and Turkmenistan to come together with civil society organizations and international experts to share best practices for fighting trafficking.

Chargé d’affaires Paul Poletes, speaking at the conference, emphasized the priority the United States places on the fight against human trafficking, “Human trafficking is a complex, hidden crime that preys on the most vulnerable in our societies. Trafficking affects all countries and traffickers respect neither borders nor jurisdictions. It is only through collective efforts that we can comprehensively address human trafficking.”

In 2021, the Department of State upgraded Uzbekistan to Tier 2 in the Department’s annual Trafficking in Persons Report; it maintained this ranking in 2022. This status reflects the Government of Uzbekistan’s commitment to combating all forms of slavery, forced labor, and human trafficking.

The conference, which coincided with the World Day against Trafficking in Persons, included Senate Chairperson Tanzila Narbaeva and Deputy Minister of Internal Affairs Shukhratjon Sobirov. Participants focused on strengthening national and international partnerships for CTIP. Representatives discussed the use and abuse of technology to enable or impede trafficking in persons and the development of national and transnational referral mechanisms within Central Asia.

Since May of 2021, USAID’s Safe Migration in Central Asia activity, in partnership with the CTIP Commission, has trained approximately 500 government workers and civil society specialists to fight trafficking. USAID has also assisted in the creation of a national database to collect and analyze trafficking-related data.

USAID promotes transnational referral of trafficking victims between Uzbekistan, Kazakhstan, and Kyrgyzstan. It also facilitates the identification of victims and makes possible their safe repatriation. Through local partners, USAID provides the legal, psychosocial, and economic support that trafficking victims need to reintegrate into their communities.

Since 2005, the U.S. Government, through USAID and INL, has invested more than $12.5 million in Uzbekistan to combat trafficking in persons. USAID’s Safe Migration in Central Asia activity is implemented by Winrock International.

USAID partners with the Government of Uzbekistan to diversify the country’s economy and increase regional trade, address serious health threats – including COVID-19 – and build the government’s capacity to respond to the population’s needs. For more information, please visit: https://www.usaid.gov/uzbekistan, and Facebook page: https://www.facebook.com/USAIDUzbekistan/