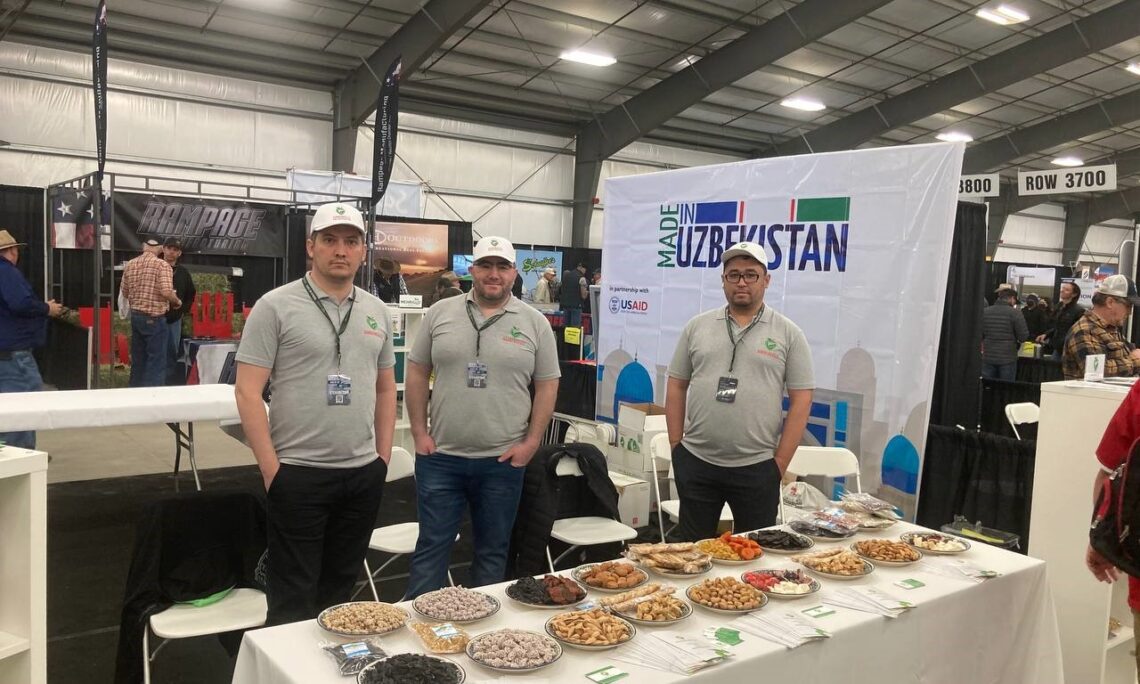 With funding from USAID, three large Uzbekistani horticulture exporters and the Export Promotion Agency of Uzbekistan attended the annual World Ag Expo in Tulare, California from February 8-10, 2022.  This was the first time any Uzbekistani fruit exporter had attended the event.

The companies paid for travel expenses and USAID funded booth fees and helped with business-to-business matchmaking.  By the end of the Expo, all three companies had entered into negotiations with U.S. importers.  Last week, one of the companies reached a deal to provide over $1 million of dried fruits – specifically, dried apricots and dried grapes – to a New York based U.S. food importer.  Another company established contacts with West Hills College, an American school in California’s San Joaquin Valley, to work on exchange visits for horticulture producers.

Agriculture is one of the largest employers in Uzbekistan.  This sector accounts for approximately 27 percent of GDP and employs an estimated 25 percent of the labor force.  In 2021 Uzbekistan exported 1.5 million tons of fruits and vegetables, worth $957.3 million. This constituted a decrease by 5.1 percent compared to 2020.  The majority of the exports are sent to Russia, Kazakhstan, Kyrgyzstan, China and Pakistan. Uzbekistani exporters have struggled to enter the highly competitive and premium markets of Western Europe and the U.S.  This deal of $1 million with the U.S. food importer, while small in global terms, represents a significant step forward for agricultural trade between Uzbekistan and the U.S.  The contact with West Hills College is also significant. As Uzbekistan expands its horticultural sector, access to American technical expertise, tools, and agricultural equipment will become increasingly important for Uzbekistani exporters.

The World Ag Expo includes more than 1,200 exhibitors displaying the latest in farm equipment, products, communications and technology.  The Expo is attended by more than 100,000 visitors, large scale buyers, and retailers from 65 countries.

The American people, through USAID, have invested more than $500 million in Uzbekistan since 1993.  USAID is the world’s premier international development agency and a catalytic actor driving development results. For more information, visit: https://www.usaid.gov/uzbekistan and Facebook page: https://www.facebook.com/USAIDUzbekistan