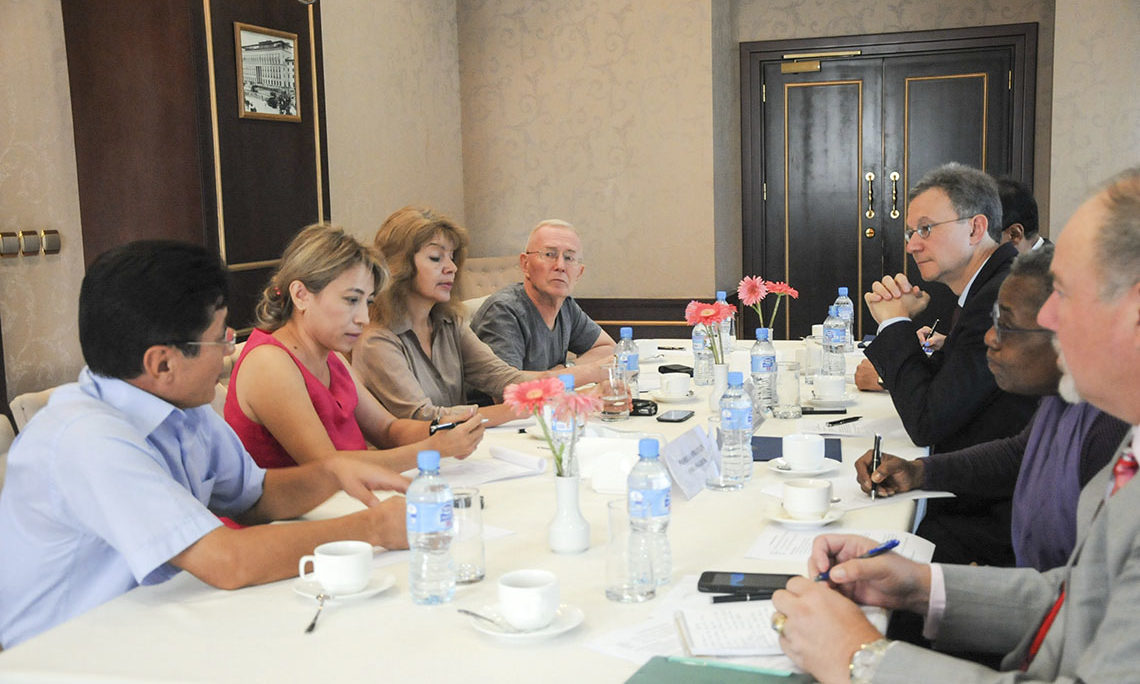 DAS Rosenblum:  Thank you, Jon, and thanks to all of you for coming to meet this morning.  I want to get right to your questions because I know you have questions but let me just say a couple of words.  I am here in Tashkent these few days representing the U.S. Government so that I can express our condolences on the death of President Karimov and also to show our continued commitment to our partnership with Uzbekistan.  I had a chance yesterday to meet with the Foreign Minister as well as the Chairman of the International Relations Committee in the Senate and also to pay my respects to the President’s memory and to sign the condolence book that was in the Parliament.  We know very well that changes in leadership are always difficult for any country but we also know that these transitions provide opportunities for countries to find ways to adapt and also to grow stronger.  And as President Obama said in his message that came out I think on Saturday, as Uzbekistan begins a new chapter in its history, the United States is committed to its partnership with Uzbekistan, to its sovereignty, and to its security, and to a future for the country based on the rights of all of its citizens.  So, we look forward to increasing and to developing our relationship, our partnership with Uzbekistan in the years to come.  And with that, I will have your questions.

Q:  Yuri Chernogaev, Anhor.uz.  Regarding the agreements between Uzbekistan with the United States, since all of those agreements and other treaties, arrangements have been signed while Islam Abduganiyevich Karimov was the president, my question is as follows:  Will there be any need to review those agreements, will there be any need to complement, to add something, to expand or to review those arrangements in regard of today’s situation?  My second question is about the upcoming elections in the United States – were there are any references to Uzbekistan in the context of the elections and whether presidential nominees Trump or Clinton made any reference to Central Asia or, in particular, to Uzbekistan?

DAS Rosenblum:  Well, those are two very important questions, so thank you for asking them.  First of all, in terms of agreements and treaties, normally – and this is normal in international relations – the treaties between countries are between the governments of the two countries, not between individuals, and they last through transitions of leadership.  In terms of our specific agreements with Uzbekistan, when the new government is formed here, I am sure we will discuss with them whether there is any need for review of agreements but as far as we are concerned, agreements can last as long as they are useful for both sides.  And I will also add that in my meeting with the Foreign Minister yesterday, he expressed his strong desire for stability in the bilateral relationship, so we took that as an important message as well.

With respect to the U.S. presidential campaign and the candidates, I am not aware of any positions or specific statements regarding Central Asia or Uzbekistan.  I think I read a news report some weeks ago that there was a line in the platform of the Republican Party that they have adopted at their convention that speaks about Central Asia, but it was a pretty general kind of statement.  It really hasn’t come up as an issue in the campaign to my knowledge so far.

Q:  My name is Luiza Mahmudova.  I represent the Turkiston-Press news agency.  From the point of view of the United States, to which epoch or stage has Uzbekistan arrived, or achieved, by the moment of the death of President Islam Karimov?

DAS Rosenblum:  I think what we have observed over the past 25 years in Uzbekistan and actually in the broader region, as well, is the gradual development of independence and sovereignty in countries that did not have it before and I think that Uzbekistan has made significant progress with respect to establishing its sovereignty as an independent state.  So, I think that this 25-year period, which, of course, was just marked with a celebration in the region just in the past week, will be seen as a period where that independence was established for young nations just emerging after the breakup of the Soviet Union.

Q:  My name is Muhammadsharif (Mamatkulov).  I represent the Reuters news agency.  Regarding the policy of Islam Karimov, it was about keeping a certain distance from Russia.  In your point of view, if the new government tries to go under the orbit of Russia, what would be the response of the United States, if Uzbekistan joins the CSTO, for example, the Eurasian Economic Union?  In this regard, what would be the response of the United States?  Would you persist on closer ties with Uzbekistan, or otherwise?  And my second question is regarding your meetings with officials of Uzbekistan.  We haven’t heard any confirmation that the Chairman of the Senate is now acting President of Uzbekistan as it is said in the Constitution of Uzbekistan.  So, during your meeting, have you had any hints from the Uzbek side, any statement, if this is the case?  And have you seen Chairman Yuldashev during your meeting in the Senate?

DAS Rosenblum:  Thank you for those two questions.  Again, very essential issues.  Regarding the future of Uzbekistan’s relations with its neighbors, including Russia, first of all, I won’t speculate or talk about hypothetical scenarios for the future, but I will just make a couple of basic points that we have consistently made over the years.  One is that we believe very strongly in independence and sovereignty of countries around the world, and including especially in Central Asia, and to us independence and sovereignty means that every country gets to decide how it wants to associate itself, what organizations it wants to belong to, how it wants to shape its relations with other countries. So, we will continue to support that right for Uzbekistan, as well, into the future.  The second point that I would make is that we think it is important for Uzbekistan to have good relations with all of its neighbors and to us it is not a competition and we don’t view this as harmful to the United States if Uzbekistan has friendly relations with Russia, with China, with Kyrgyzstan, Tajikistan and Kazakhstan, as well.  In fact, we think it is important for them to have those relations.

Your second question was about the Constitution and the process, I think, for elections and transition, and on that point I would just say that it wasn’t the focus of my discussions yesterday although as the U.S. has said in its statements, we expect that the process of transition, we hope that it would be smooth and according to the Constitution, and I think that, from what we understand so far, that is, in fact, the intention.  I did not see the ChairmanYuldashev yesterday.  My understanding is that when I was meeting with Chairman Safoyev, Chairman Yuldashev was at a plov for the morning period, so we did not cross paths.

Q:  Umida Maniyazova, Ca-news.org.  The last events divided the community, not only in Uzbekistan, but the communities in other countries, as well.  One side was really grieving about the passing away of President Karimov; the other side was expressing some ill intentions regarding this event.  As a very important diplomat of the United States concerning Central Asia, I would like to know your point of view regarding the views of these two camps.  Maybe it was the way it should be, expressions of two varied points of view, or was it unethical from the second camp’s representatives to make such ill-intentioned statements?

DAS Rosenblum:  Well, this is a period of mourning and of grieving for the nation and I have frankly not followed the internal discussions or online discussions and that sort of thing, reacting to the President’s death.  I will just say that it is important for every country to have time to reflect on its leaders after they pass away – we have been through this in our country in the past – and that it is also important for people to have the freedom to express their views, and of course that is something that the U.S. has often advocated for around the word, a freedom of media, freedom of expression, but I won’t comment on specific debates that might be going on between different people about how to assess President Karimov and his legacy.