On October 13, the United States Embassy in Tashkent joined the 15th annual worldwide Daniel Pearl World Music Days with a gala concert at the Old U.S. Embassy Chancery in Chilanzar.  About 500 guests attended the concert, which featured legendary artists Farrukh Zakirov and Yalla, Shahzoda, and DJ Piligrim, as well as up-and-coming artists IWALF Band, Archie Sundance, Janset Bogdalova, and Janna Kim.  These hot new artists were selected from more than 30 talented young musicians across Uzbekistan who submitted recordings via Facebook.

As Deputy Chief of Mission Les Viguerie noted in his opening remarks, “Your presence here is a testament to the power of music to break down walls and bring people of different cultures, races, and beliefs together.  In the spirit of harmony this concert represents, we have a number of young Uzbek musicians at the beginning of their musical careers, performing American and original English-language songs, alongside some true legends of Uzbek music.  So there you have it, all on one stage – three generations of amazing music and two glorious cultures, united to celebrate one harmonious humanity.”

Daniel Pearl World Music Days is an annual global concert network affirming the ideals of tolerance, friendship, and our shared humanity.  The World Music Days are inspired by the life and work of journalist and musician Daniel Pearl, who would have celebrated his birthday on October 10.  Daniel lived a life that knew no geographical boundaries, with a spirit that knew no prejudice.  While working as a reporter in South Asia in 2002, he was kidnapped and murdered by terrorists in Pakistan, sparking international outrage.  Since then, every year throughout October, musicians around the world join in “Harmony for Humanity” to promote peace and understanding through music, uniting against violence and working toward a world without hate.  Since 2002, Daniel Pearl World Music Days has featured more than 14,000 performances in 140 countries. 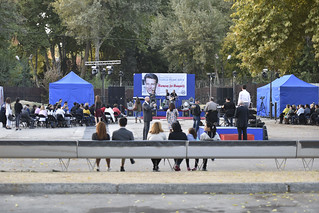