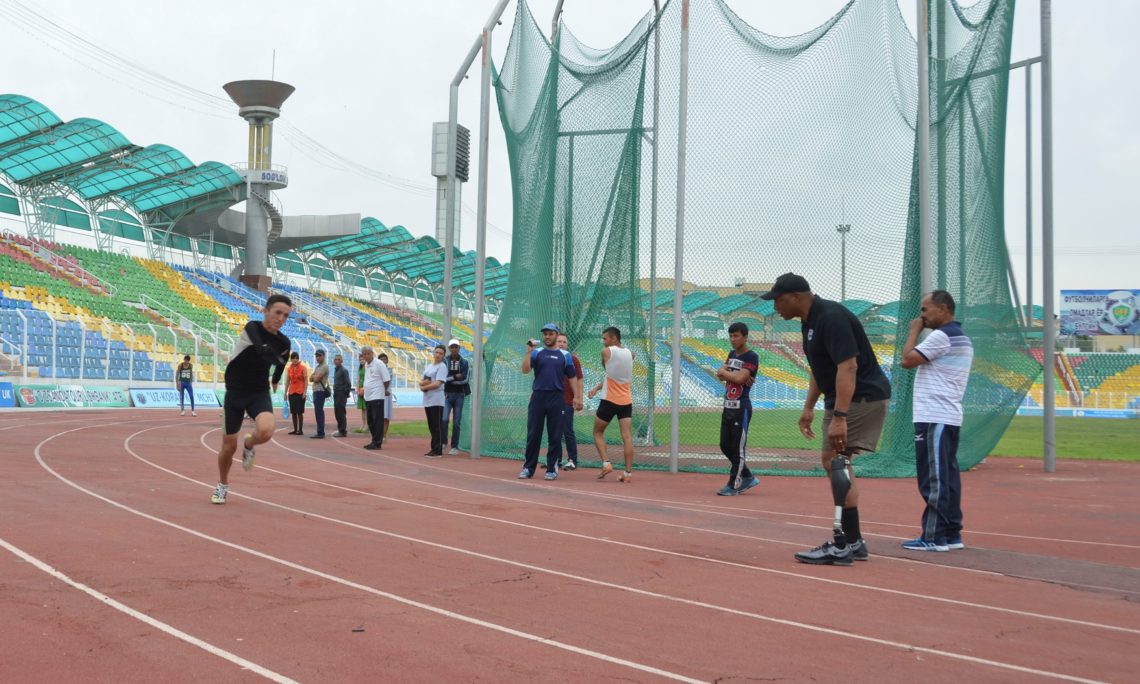 American Paralympic athletes, Mary Kate Callahan and John Register, visited Uzbekistan as Sports Envoys from May 16-21, a first for Embassy Tashkent’s cultural diplomacy efforts. The U.S. Department of State forged a partnership with the National Paralympic Association of Uzbekistan to carry out the two envoys’ mission of educating and promoting disability rights in the region.

Callahan and Register worked in Tashkent and Andijan, two of Uzbekistan’s most densely populated areas. There, they led master classes in swimming and track and field at the Andijan College of Olympic reserve. Register and Callahan were able to conduct outreach to 60 disabled students, 15 coaches, and 30 Paralympic athletes from the Andijan, Fergana, and Namangan regions in Uzbekistan. Callahan and Register also conducted master classes at the Tashkent College of Olympic Reserve, again sharing their experiences with approximately 60 coaches and students.

Disabled youth from Uzbek orphanages were also able to take part in these master classes through the help of a local charity. Due to the impact the American envoys were able to make on the lives of these children, the U.S. Department of State will continue engagement with the charity and children with plans to lead English language conversation clubs in their upcoming summer camp.

Furthermore, Callahan and Register were able to conduct further outreach through their media appearance on one of the most popular Uzbek radio stations, Oriat FM, which reaches over three million Uzbek citizens. The envoys also led the Embassy’s Chai Chat Club and provide further education on sports in America, which attended by over 60 young Uzbeks. Their media tour ended with a press conference with approximately 20 local journalists and their interviews were aired on Sport TV, which reaches approximately five million people nationwide. Moreover, both athletes and the embassy utilized social media as a way to tell their story worldwide.

The Sports Envoys were also able to exchange contact information to continue dialogue with those they worked with in-country. This was wonderful to see, as it demonstrates the openness and eagerness of Uzbek athletes to engage in possible future American athletic exchanges.

Due to the success of the two envoys and their program, the U.S. Department of State will be planning follow-up events in the region. Callahan and Register were invaluable to this achievement given their openness and promotion of inclusivity, tolerance, and equal rights.