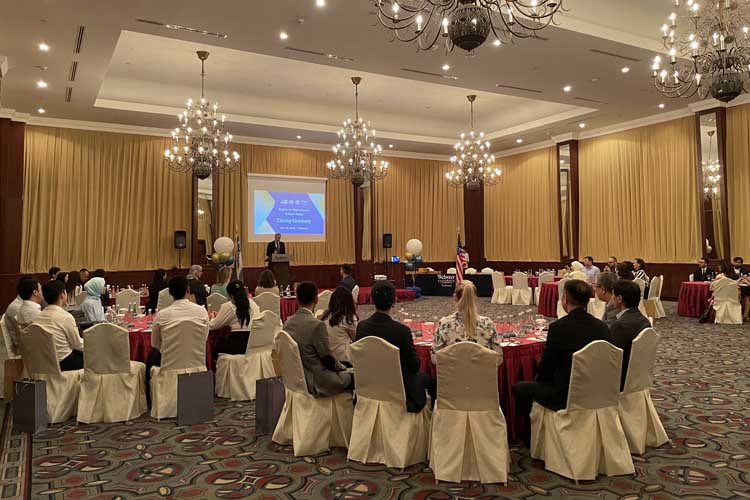 Asalomu Aleykum, dobroe utro, good morning to all my friends and colleagues in the room! Most of all, congratulations to the graduates of the English for Professionals in Mass Media (EPMM) program!!

I’d like to thank Webster University for partnering with the U.S. Embassy on this wonderful program. Dr. Jinker, Maggie, and I think a few others who have been instrumental in this program: Shahista, Farida, and Lyubov – we really appreciate the work that all of you have done to make this program a reality. We formed a really strong partnership over these past two years between our Embassy and Webster, and the strength of that partnership was tested in those years as we navigated the pandemic and the challenges of virtual learning in that period. I’m delighted to say that we passed the test!

And I also want to thank the Webster team for your efforts to run a virtual program in Fergana. With the opening of a new Webster campus in Fergana, I believe this fall, we are looking forward to being able to conduct this EPMM program in Fergana in person next year – and maybe even having representatives of our Embassy attend an opening, or closing, or both in Fergana!

We are also hugely grateful to our good friend and colleague, Josh Gaston, for his work heading this program for the past two years. I know all the participants have enjoyed attending his sessions. We’re very sad that this is Josh’s last year in Uzbekistan as EPMM Coordinator. Josh, we wish you success in your new endeavors and we thank you for all of your service to this program. What an incredible contribution you have made to Uzbekistan’s development and to the US-Uzbekistan partnership.

I also want to applaud all of you – as we applauded Josh, I want to applaud all the participants! Dear EPMM graduates: As working professionals with full-time jobs – and in many cases, I’m sure, also full-time families – that can also be a full-time job! – it is so impressive to me that you made the time to participate in this program. This means that you put a very high value on improving your ability to use English for reporting, writing, and producing your stories. And it means that you put a high value on having access to sources of information that are in English.

Most of all, your commitment to this program means that you agree with the words of the Deputy Chairman of the Board of Trustees of the National Fund for Support and Development of Media, Saida Mirziyoyeva, who said in a speech exactly one month ago, and I quote: “Freedom of the mass media and high-level journalism are an integral part of democracy.” She went on to say, quote, “real reforms cannot be achieved without ensuring freedom of speech, transparency of public authorities, and accountability to society.”

So the question is – and what I want to talk to you a little about today – is whether those very high goals, those lofty goals in that statement I just read are being achieved in Uzbekistan today. And if they are not being achieved, what is the role that you will play — as talented, hard-working, professional journalists – in making that vision into a reality?

In April, just last month, many of us– and I would imagine many of you in this room – were surprised to learn that Uzbekistan had improved its ranking in the Reporters Without Borders “World Press Freedom Index” for 2022, moving from 157th place to 133rd place. The way this news about the ranking was reported here in Uzbekistan was pretty interesting to me: most media sources simply reported that the ranking had moved up 24 places, and quoted the Presidential press spokesman, Mr. Asadov, or the chairman of the board of the Media Support Fund, Mr. Allamjanov, both of whom touted this as international recognition of Uzbekistan’s significant progress towards a freer media environment. To be fair, Mr. Allamjanov also noted room for improvement, saying that “if the press is given less interference, we have a chance to rise to a higher level.”

Several media outlets outside Uzbekistan, however, pointed out that there was more to this story than meets the eye. There is a real story behind the superficial story. And I think you would all agree with me that the job of professional journalists is to find and report the “real story.”

The fact is, there is a more complicated reason to explain Uzbekistan’s big rise in the rankings, one that has nothing to do with improvements in conditions for free and independent media, or the treatment of journalists and bloggers. The fact is that, for its 2022 World Press Freedom Index, Reporters Without Borders (which is also known as Reporters Sans Frontieres in French, which is RSF), that they completely changed the methodology for evaluating countries. They introduced five new indicators of press freedom, and they used new types of surveys to measure a country’s performance on each of those indicators.

As a result of this change in methodology, many countries changed places, both up and down. So it is very difficult, maybe even impossible, to make meaningful comparisons between the 2021 rankings and 2022 rankings.

I will also quote a few excerpts from the RSF report that accompanied the 2022 World Press Freedom Index rankings: “The authorities largely control the media, as well as a number of bloggers with close ties to the government…Authorities still have not implemented the reforms needed to abolish laws that enable repression of the media. Surveillance, censorship and self-censorship are prevalent…Officials make it a practice of exerting economic pressure and of trying to corrupt journalists…The last imprisoned journalists have been freed but not rehabilitated…Bloggers are threatened and arrested.” Those are all quotes from the World Press Freedom Index report from RSF.

Now, it’s also important for professional journalists – and for Ambassadors! – to be fair and balanced in their reporting, and as fair and balanced as possible. And that often means providing meaningful context for stories. And the meaningful context for the story about Uzbekistan’s ranking in the 2022 RSF World Press Freedom Index should also include an acknowledgement that the environment for journalism and the degree of media freedom and media diversity in Uzbekistan today is hugely improved from what it was six years ago. At least that’s my opinion. I’d be interested to hear what your opinions are, but my opinion is that, based what I observed and heard when I came here BEFORE 2016 versus what I have seen and read and heard from talking to journalists all over the country — after 2016, the situation is hugely improved overall in terms of the degree of media freedom and diversity and the environment for journalists.

There has been a dramatic and, overall, positive change in the media landscape since 2016. There are more opportunities than ever before for journalists to report what is really happening in your country, or in your government, or in your society.

At the same time, there are serious shortcomings in the media legal framework; in the attitude of too many officials toward the media; in the professional standards and ethics that exist for journalists; and most importantly, in the ability of journalists to work without pressure and intimidation, especially when they are reporting in areas that someone considers politically sensitive. There is far too much self-censorship as journalists learn what “red lines” they cannot cross because they are made to fear crossing those lines.

And I would argue that those shortcomings became even sharper and more noticeable in the past year. Which is why I – and so many other observers of Uzbekistan – were so deeply surprised to see the news about the World Press Freedom Index rankings. Surprised, that is, until we found out the story behind the story!

I hope, and I believe, that you – the brave, hard-working and dedicated representatives of the Fourth Estate, as it’s called – have found these English language courses to be useful for your daily journalistic work. And that these courses will help you continue to do your honorable work at an even higher and more professional level. I have so much admiration for you and for what you do.