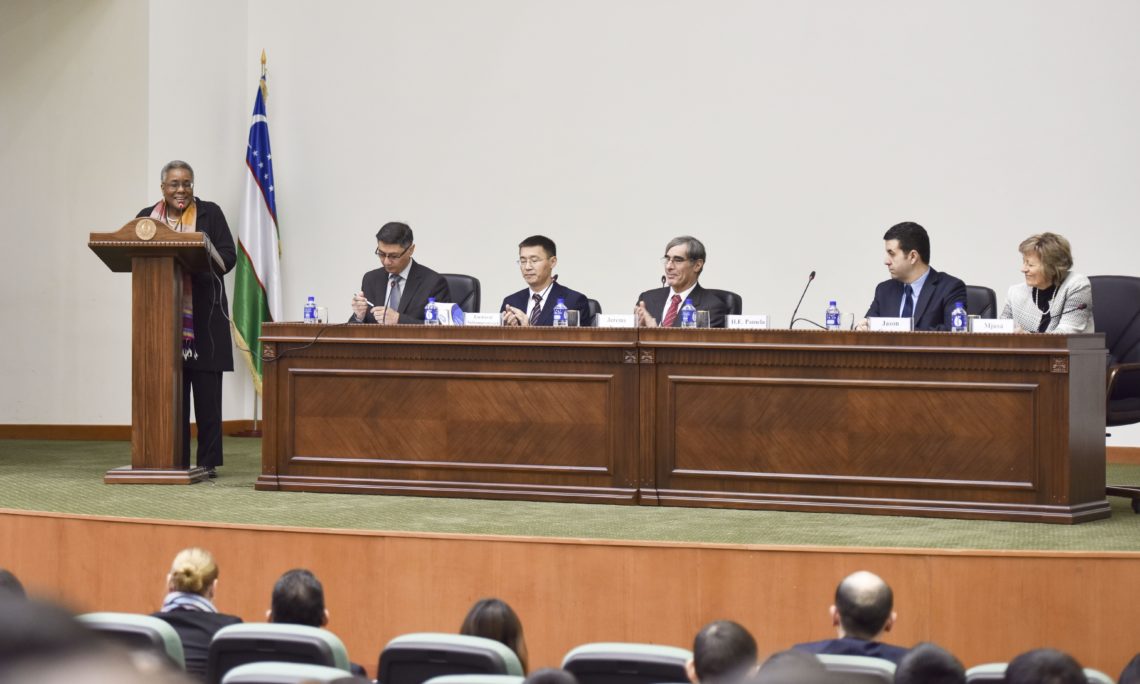 First, I would like to thank Rector Kanyazov for hosting us today and for helping me.  My job is to strengthen relations between the United States and Uzbekistan.  This event is a wonderful example of our growing cooperation and is a welcome step in the ongoing dialogue between the Federal Judicial Center and Uzbekistan’s judiciary.

This university has played a key role in support of the Government of Uzbekistan’s ongoing reforms in the judicial sector.  I commend the Rector Kanyazov’s efforts to raise educational standards, increase the transparency of the admissions process, and build strong partnerships with U.S. universities, such as Boston College.

Second, I want to say a few words about the U.S. effort to support Uzbekistan’s reform process.  Over the past year, President Mirziyoyev has launched a program of reform that touches all spheres.  Many of these initiatives concern the justice sector, particularly the issues of transparency and independence of the judiciary.

In any healthy society, every citizen must feel assured of the full application of and fair treatment under the law.  Without it, we cannot feel any sense of justice.  The human urge to protect our own interests over those of others makes the struggle for rule of law constant, both in mature and developing societies.  Thus, we support President Mirziyoyev’s goal of creating a system that delivers more fairness, efficiency and transparency to all.

What are we doing?  Well, The United States supports the NGO Regional Dialogue, which has worked with the university and Boston College School of Law to build a partnership that produces positive results.  For example, Boston College professors delivered training in research and legal skills this past December.  We look forward to further results from the summer school in Charvak in 2018.

We also support other institutions to support Uzbekistan’s efforts to ensure the independence of the judiciary.  For example, we also sponsor the e-court system, a highly successful initiative to bring greater transparency and efficiency to civil matters.  But this is only a beginning.

The continued success of reforms in the legal sector will fall to you, Uzbekistan’s future lawyers, judges, and prosecutors.

Finally and most importantly, it is my honor to introduce our distinguished speaker.  Judge Jeremy Fogel is the Director of the U.S. Federal Judicial Center.  This is his second visit to Tashkent under the U.S.-funded Rule of Law Project and he is a great friend of rule of law efforts in Uzbekistan.

The center Judge Fogel leads provides international assistance focused on developing the capacity of courts and judicial training centers around the world, and linking U.S. judges with their counterparts in other countries.  The center has hosted several delegations of Uzbekistan’s court officials since 2013.  Rector Kanyazov and Vice Rector Kamalov visited the center in March and April last year.

Judge Fogel is from California.  He received his education at Stanford, then graduated from Harvard Law School.  He served as a distinguished state court judge in California for many years and has a long and distinguished record of assisting judicial systems overseas.

Judge Fogel will deliver a lecture on “Ethics and Transparency as Foundations of an Independent Judiciary.”  I hope you will take advantage of this unique opportunity by asking lots of hard questions as you prepare to lead the judiciary of Uzbekistan into a future that guarantees fairness, transparency, and justice for all its citizens.