Prime Minister Aripov, distinguished guests from the Government of Uzbekistan, colleagues from the Diplomatic Corps, and valued contacts representing: civil society, business, health, education, and the press –  Welcome – and thank you for joining the U.S. Embassy in this celebration of America’s Independence Day – here in Tashkent.

At the dawn of America’s national life, no one knew what the future might hold for freedom, democracy, prosperity and unity.  Through many trials, we have learned to lead the way for ourselves and our friends and partners worldwide.

Since gathering together on this occasion last year, both of our countries have experienced significant change. Uzbekistan mourned the passing of its First President, Islam Karimov, followed by an election resulting in the orderly transition of power to President Shavkat Mirziyoev under the eye of the largest multi-national observation mission in the country’s history.

In the United States, we saw a long campaign season come to an end resulting in the election of President Donald Trump in November.

Since assuming power, both presidents have begun the process of getting to know one another, first through exchanges of official letters, second through a brief encounter in May at the Arab Islamic American Summit in Saudi Arabia.  We look forward to the president’s first visit to the United States in the context of the UN General Assembly meetings in September of this year.

Significant change continues to occur at the most senior levels in both our governments.  However, in a time of transition, it is also important to recognize many things that remain constant.

As we have done for more than 25 years, the United States continues to support the independence, sovereignty, and territorial integrity of Uzbekistan.

I would like to review a few of the major events in our bilateral relations this year.  In late October, Under Secretary Thomas Shannon visited Uzbekistan and met then interim president Mirziyoyev.  The Under Secretary met with Uzbekistan’s citizens from all walks of life, including business, civil society, religious communities, the press and the government.

Since President Mirziyoyev’s election, we have witnessed an encouraging opening to cooperation with the United States and new businesses through the meetings of the American Uzbekistan Chamber of Commerce in February.  Several large U.S. firms signed memoranda of agreement.

Our security cooperation continues to be active.  In March, we welcomed the visit of CENTCOM Commander General Joseph Votel to express our appreciation for Uzbekistan’s continued role in providing supplies to Afghanistan through the Northern Distribution Network.

In March, we marked 25 years of our physical diplomatic presence through a ceremony at our old chancery, an important milestone for us.

Just this month, we focused on high technology and innovation through the visit of the President’s Science Envoy, Dr. Linda Abriola of Tufts University.  The purposes of her visit coincide well with a recent high technology fair which I happened to attend during the Prime Minister’s visit.

In international affairs, the United States applauded the visit of the UN Secretary General earlier this month and the unprecedented April visit of the UN High Commissioner for Human Rights.

We welcomed the release of several long-imprisoned individuals and would welcome further steps in various areas of the human dimension from additional releases, media freedom to civil society development.

Our programs to support English language development continue to expand and develop and our musical programs continue to be popular.

Through the U.S. Agency for International Development, we continue to support Uzbekistan’s efforts to diversify its agricultural production and modernize its labor practices.

Whether we are cooperating in the Fergana Valley to improve farmers’ livelihoods by improving their access to foreign markets, working together to put an end to tuberculosis and other infectious diseases, or partnering to fight narcotics trafficking, the United States and Uzbekistan strive for the benefit of our two peoples.

In the international arena, we welcome President Mirziyoyev’s focus on regional diplomacy and will continue to encourage cooperation on areas as different as security cooperation, border delimitation and water management in the interest of greater regional security and stability, often with Uzbekistan at the center of the effort.

In my role as Ambassador, I have been able to continue my official travel throughout Uzbekistan, to meet with representatives from the government, civil society, business, education, and health spheres. Over the past few months, I have had the opportunity to visit Karshi, Jizzakh, and the Fergana Valley, as well as the Aral Sea and I look forward to continuing those travels over the next year.

Dear guests, we are living in a historic moment in this beautiful country’s history.   The United States has been key partner as Uzbekistan has begun its reform process.  The government has signaled a desire for greater cooperation with the United States, including through a robust Roadmap.  In the year ahead, through this and other initiatives, our embassy and Washington colleagues stand ready to strengthen mutually-beneficial bilateral and regional cooperation across all spheres.

Although we are celebrating a little early here in Tashkent, it’s not too early to say “Happy 4th of July”! 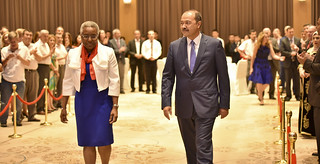